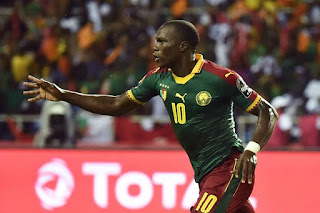 The Indomitable Lions of Cameroon have claimed their fifth African Nations Cup title after coming from behind to pip the Pharaohs of Egypt 2-1 in a pulsating final in Gabon on Sunday.

Mohammed Elneny had given the Egyptians the lead in the first half after a cracking pass from Mohamed Salah found the Arsenal forward.

But the Cameroonians levelled in the second half through a superb header from Nicolas Nkoulou, who came on as a substitute after an injury to Adolphe Teikeu.

An 88th minute strike from Vincent Aboubakar snatched the victory for the Lions, ending Egypt’s 24-match unbeaten run and avenging Cameroon’s defeat in the 2008 final.