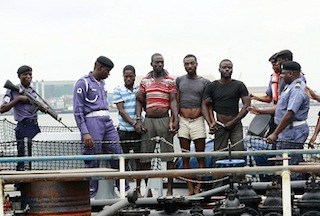 The navy says it has destroyed 40 illegal oil refineries within the past 28 days of its operation code named “Operation Rivers Sweep” launched earlier this month to check activities of oil thieves and other infractions in the waterways especially along the Bonny-Onne axis in Rivers state.

The Flag Officer commanding Eastern naval command, Rear Admiral James Oluwole disclosed this at the NNS Pathfinder in Port Harcourt while briefing journalists on successes of the operation.

The Eastern Naval command of the navy says Operation Rivers Sweep 1 carried out a successful operation after destroying 40 illegal oil refineries within its area of responsibility with the use of two naval ships in addition to 8 patrol boats drawn from the NNS Pathfinder as well as naval helicopter and other equipment.

Rear Admiral Oluwole explained that the successes achieved were possible through some strategies employed by its command to stop proliferation of crimes in the maritime sector.

With the feat achieved, the navy says it is optimistic that activities of oil thieves have been effectively checked and reduced.

This it says would further boost maritime operations and save the government huge sums of money lost to the illegal trade.

Referee robbed us against Eagles in Uyo – Algeria