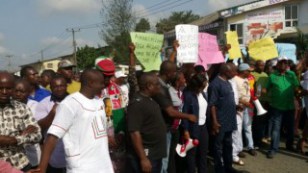 The national rally failed to hold in Port Harcourt, the Rivers State capital, due to low turn-out.
According to tvc News  that some people who turned up for the mass action blamed the development on intimidation by security personnel and the resistance from government.
The intended protesters also described as regrettable the possibility that cancellation of the protest by popular musician Tuface Idibia also contributed to the low turn out.
Residents of Port Harcourt have in the meantime called for urgent solution to the economic challenges in the country in order to avert another mass mobilization against the government.
Source: tvcn