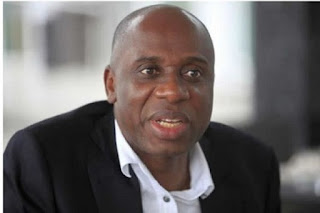 ILORIN- The Director General of the Campaign Organisation of President Mohammad Buhari during the 2015 general election and the current minister of Transport, Mr Rotimi Chibuike Amaechi
On monday said that APC government did not promise to fix Nigeria’s problem within a year and cautioned those lamenting the economic hardship to wait till the end of the tenure in 2019 for the desired change.Amaechi
Amechi also accused the National Assembly of stopping the Federal Government from fixing infrastructure problems and creating jobs for the masses by failing to approve it’s borrowing plan.
He said this just as the minister of Information and Culture, Alhaji Lai Mohammed cautioned Nigerians making statement that could cause religious disharmony warning that “no nation has ever survived religious war”.
The duo spoke in Ilorin, Kwara state capital during a north central town hall meeting ‎for the people of Kogi, Niger and host state; Kwara by the federal government.
Amechi who speaking at the occasion said though the federal government had had the cries of Nigerians that things were difficult, they have to wait till the end of the four years mandate given to the administration before they could judge whether the government had performed or not‎.
According to him,”We did not promise you that those challenges will be solved in one year,if we promise you that those challenges would be solved in one year you would have given us one year but you gave us four years mandate so wait till the end of four years before you can conclude that we have not done well”.
Source: BNN

37 days in captivity: Why we’re yet to release Lagos pupils...