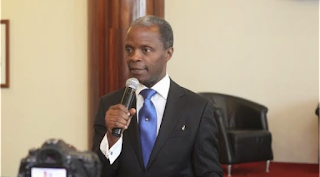 Acting  President, Yemi Osinbajo, has reacted to the series of protests in the Federal Capital Territory, Abuja, Lagos and Benin, Edo State.

Noting that the deterioration of past years cannot be reversed overnight, Osinbajo, nevertheless, assured Nigerians: “We hear you loud and clear, those who are on the streets protesting the economic situation and even those who are not, but feel the pain of economic hardship.
“You deserve a decent life and we are working night and day to make life easier,” he said.
Osinbajo said this at a consultative Forum of Economic Recovery and Growth Plan (ERGP), which President Muhammad Buhari’s administration believes will revive and set the economy on the right path.
The acting president noted that Nigeria is, indeed, “in a very serious situation”, but that “government is not unaware of the sufferings of citizens in the country,” even as some embarked on protests, yesterday.
Osinbajo assured Nigerians he is aware of what they are going through.
He said: ”I know how difficult things are. All my adult life, I have always earned salary. I know what it is like when salary is not enough.
“We are in a serious economic situation and the president was particularly concerned about the lot of the common man. Recession today, for  some, means not being able to pay school fees. For others, not being able to afford high cost of rice and millets and, for most of our young people, recession means joblessness.
“I, for one, have been across the states and, even today, some people are out on the street protesting that things are difficult. What we are saying to every Nigeria is that  ‘we hear you loud and clear,’ and we are determined to recover the economy. You have a right to demand for a better economy and we are committed to see it happen.
“Years of deterioration cannot be reversed overnight. ‎Again, it has to be said that it’s our business, it’s our duty to ensure that we put the Nigerian economy on the track of recovery.
“For the past 18 months, ‎we have had to intervene three times to states, to enable them have enough resources to pay salaries, and the last intervention was in December 2016, when we paid the Paris Club debt refund to the states.
“These were funds that the federal government was owing states since 2005. This was to enable states pay their workers and we tend to believe that this is what is being done.”
‎In his remarks, Minister of Budget and National Planning, Senator Udoma Udo Udoma said the planned ERGP is expected to drive Nigeria to a minimum Gross Domestic Product growth rate of seven per cent within the plan period of 2017-2020.
He said the government’s goal was to have an economy with low inflation, stable exchange rates as well as a diversified and inclusive growth
While admitting that execution remains key to the plan, the minister said four execution priorities have been identified for the ERGP.
According to him, the priorities include agriculture and food security, energy (power and petroleum), small business and industrialisation as well as stabilise macroeconomic environment.
“There will be a major emphasis on implementation and monitoring and evaluation of this plan. We plan to set up a specially staffed delivery unit to drive implementation of the NERG Plan,” he said.
Udoma listed the principles of the plan to include focus on tackling constraints to growth; leveraging the power of the private sector; promoting national cohesion and social inclusion; allowing markets to function; and upholding core values.
Meanwhile, some Nigerians, armed with the national flag, stormed the country’s London embassy and demanded to see Buhari.
They specifically demanded president Buhari come out to address them.
On Sunday, the president’s Senior Special Assistant on Media and Publicity, Mallam Garba Shehu said Buhari was resting at the London High Commission. He also said the president was neither seriously ill nor needed to go to hospital.
President Buhari, who was meant to return to Nigeria yesterday has written to the Senate, to extend his medical vacation, due to incomplete medical checkup.
Source: sun

We don’t want Ekweremadu in our party – Enugu APC