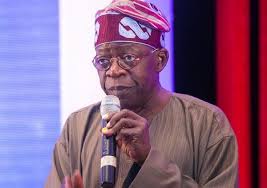 National Leader of the All Progressives Congress, Asiwaju Bola Tinubu, has urged protesters to be patient with President Muhammadu Buhari, insisting that protests cannot solve the problems of Nigeria.

Tinubu said this on Monday while addressing some anti-government protesters who were led to his Bourdillon, Ikoyi home by Moremi Ojudu, the daughter of the Special Adviser to President on Political Matters, Senator Babafemi Ojudu.
The APC chieftain  who compared economic recession to traffic congestion said traffic congestion can only delay one’s time of arrival but cannot alter one’s course.
The former governor of Lagos State said, “It (recession) is like when you are going through enormous traffic. What we are going through will be resolved. We are going through a historical phase of a country that is holding a promise for you. There is a leadership in the land and you have to live with that for now. Protests won’t solve the problem. Will it?”
When the angry protesters asked what would solve the problem, he added, “The issue is re-planning, being responsive, being able to get engaged with you so that you will see the problem that we are facing. That is it.”
Tinubu advised Nigerians to stop complaining about the unfavourable exchange rate.
He said only importers should be affected by the Forex scarcity since Nigerians earn their salary in naira.
The former governor of Lagos State said the Peoples Democratic Party misruled Nigeria for 16 years and it would be unfair to expect Buhari to fix the problems of the nation in less than two years.
Tinubu said, “We are just two years into the administration. To make those changes effective and positive eventually, we have to be patient. The damage of 16 years will go through the system. You cannot get water out of a dry well.
“I am not worried by the exchange rate because your salary should be in naira and you are not an importer. May be that is even teaching us a lesson; to be dependent on our domestic products.
“I understand what your grievances are: Unemployment. We have tackled insecurity, corruption is seriously being attacked.”
Source: punch