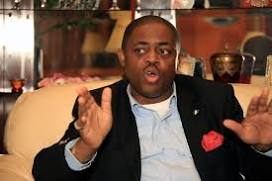 A former Minister of Aviation, Mr. Femi Fani-Kayode, on Tuesday, denied any intention to enter into plea bargain with the Economic and Financial Crimes Commission in respect of the N26m fraud charges instituted against him before a Federal High Court in Abuja.
Some media reports (not of The PUNCH) had stated that the ex-minister’s lawyer, Mr. Ahmed Raji (SAN), had indicated to Justice John Tsoho of the Federal High Court in Abuja on Monday that his client was considering the option of a plea bargain.
Raji, who newly took over the ex-minister’s defence, had on Monday sought an adjournment of the case to “get familiarised” with the file, adding that “I believe there are other options rather than a full trial.”
But speaking with our correspondent on the telephone on Tuesday, Fani-Kayode said his lawyer’s comment in court was misconstrued by some reporters.
He insisted that he had no plan to enter any plea bargain or return money to the EFCC.
He said he was prepared for trial to enable him to clear his name.
He said, “I am not seeking any alternative procedure. I am assuring you right now that there is no question of me paying any money back to the EFCC.
“There is no question of any plea bargain; I have already made my plea in court.
“As far as I am concerned, I am more than ready for the trial to proceed. I am happy to be in court because it gives me the opportunity to clear my name and put this matter behind me once and for all.
“On the issue of my counsel, Mr. Ahmed Raji (SAN), whose comment in court other newspapers, not The PUNCH, misconstrued; at no point did he mention that we were going to pay money back or I was going to change my plea or enter into a plea bargain.
“At no point did he say anything like that. I felt it is important for me to clarify that.”
The EFCC had on November 11, 2016, arraigned Fani-Kayode on five counts involving alleged diversion of N26m which he allegedly received from the then National Security Adviser, Sambo Dasuki, in November 2014, under the guise of payment for a contract.
Fani-Kayode, then the Director of Media and Publicity of the Peoples Democratic Presidential Campaign Organisation, allegedly received the money from the Office of the National Security Adviser when he “reasonably ought to have known that the said fund formed part of the proceeds of an unlawful activity of  Dasuki and the then Director of Finance and Administration of the ONSA, Shuaibu Salisu”.
Source :punch

DANGER: You will Die in 7days if you dont return our...