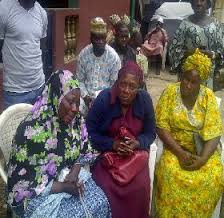 A prosecution witness in the ongoing trial of four men accused of kidnapping a traditional ruler, the Oniba of Iba town in Lagos, Friday told an Igbosere High Court, Lagos that the monarch’s wife was shot at least thrice.

The Olori’s husband, Oba Goriola Oseni, was kidnapped from his palace at Iba last July 16.

First to fourth defendants Duba Furejo, Ododowo Isaiah, Reuben Anthony and Yerin Fresh were accused by the police of being behind the crime.

They police also alleged that they murdered ‎a security guard, Sunday Eniola Okanlawon, a commercial motorcyclist, Joseph Okeke and also robbed the Olori of her mobile phone before shooting her several times.

At the commencement of trial yesterday, Mr Jide Martins, an Assistant Director of Public Prosecution, introduced Eke as the sixth prosecution witness.

Eke stated that her team, including several surgeons and other doctors, saw the Olori for the first time in the early hours of last July 17, suffering from life-threatening gunshot wounds.

“She was pale, restless and in shock. She had lost a lot of blood from her wounds, her blood pressure was low and she was very drowsy,” Ekeh said.

The wounds, she added, was likely caused by a penetrating bullet and two operations were carried out on the patient.

Eke said the Olori “could have died had treatment not been administered” and that the surgeries saved her from “immediate death” or “death in days” from an infection of the wounds.

Under cross-examination from counsel to the first, second and third defendants, G. O. Egwuaroje and fourth defendant’s counsel, Anthony Onwueze, Eke testified that the Olori’s wounds were three at the front and one at the back.

She said they were spherical in shape and more likely to have been caused by gunshot.

The defendants were arraigned on October 24, on an eight-count charge bordering on conspiracy, murder, attempted murder, robbery, armed robbery, felony and kidnapping.