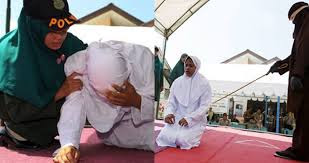 Harrowing images have captured the moment an Indonesian woman screams and cries in pain as she’s forced to endure 26 lashes for allegedly having sex outside of marriage .

The woman and the man she was accused of having sex with were brought up on a stage and caned in front of a crowd of people.

In Sharia law, sex outside of wedlock is strictly forbidden and those accused face severe punishments.

In the images, the woman can be seen kneeling in front of a mosque as she prepares for her lashes, delivered by a man dressed in black with his face almost entirely covered.

At one stage, she clutches her head in her hands and appears to be sobbing as she attempts to endure the intense pain.

She then covers her face as she waits anxiously for the next blow.

The Daily Mail reported that after the woman was humiliated in front of the crowd, it was the turn of her alleged partner.

He was being brought up to the stage by two police officers and forced to stand while he is also handed 26 lashes.

It is believed that the images were captured in the Aceh province in Indonesia, according to the only province that is allowed to implement Islamic Sharia law.

Aceh was granted special autonomy in 2001 and can also hand out punishments for alcohol consumption and gambling, as well as for sexual relations outside of wedlock.

Police role in aborted arrest of judge in Rivers exposed

My relationship with friends, classmates remains the same – 17-year-old Delta...