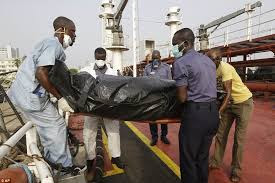 A retired staff of Shell Oil whose identity could not be ascertained at press time has been killed in Benin City, the Edo State capital.

Eye witnesses said  the deceased was in a white Hilux van when a group of armed men emerged from a black Toyota Highlander and shot him severally at a close range.

The witnesses said he was shot in the head while his son was hit by one of the bullets.

Wife of the deceased was said to have screamed for help and attracted people to the scene.

A pump-action gun was said to have been found at the back seat of Hilux vehicle belonging to the victim.

Edo State police spokesman, Moses Nkombe, confirmed the incident but dismissed the speculation that the killing was cult related.

Nkombe said it may have been a case of an assassination adding that the son of the deceased was responding to treatment.

Nkombe said, “Yes, somebody was shot yesterday (Friday). The body was taken to a morgue. Investigation is on.

“They (assailants) did not stop; they just shot him and continued the movement. So, we are on the trail of the suspects now; the police are investigating.

‎”The man was a retired Shell worker. It is like a case of an assassination; they did not stop. They just shot him,” he said.

SANs WITH INSANITY: ABIA APPEAL PDP LAWYERS, THEIR NAIVETY AND...