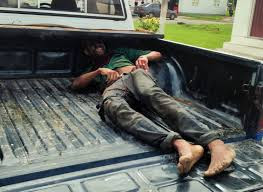 Osun Police Command says it has arrested a man who allegedly killed his 85-year-old mother with a machete.

The police spokesperson in Osun, Folashade Odoro, said in a statement in Osogbo that the suspect, allegedly machete his mother, Mrs Taibat Ayiola, to death at Akinleye Village near Osu on Friday.

“The reason for the killing is yet to be ascertained because the suspect has not given any reasonable cause for his action.

“The corpse of the victim had been deposited at the OAU Teaching Hospital, Ile-Ife for autopsy while the case is under investigation,” said the police spokesperson.

Similarly, the police in Osun said it had arrested a 45-year-old man in Ikirun on Thursday for allegedly killing a man who bought a piece of land from him.

The police said the man was killed when he asked for a refund.