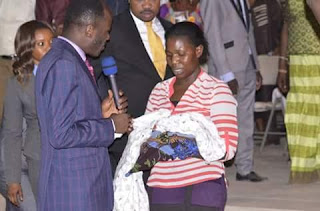 Since Wednesday, 8th February, 2017, the world attention was turned to Auchi, Edo State, Nigeria, for the 2017 ‘The Ebenezer’ programme in commemoration of the 13th anniversary of Omega Fire Ministries.

The programme themed ‘From Glory To Glory’ is not only aimed at redeeming straying souls and restoring the well-being of people, it is also targeted at destroying evil machinations in the lives of people across all ages, statuses and races. 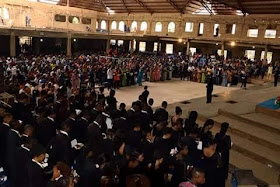 Prophecies and healing miracles characterized the first three days of the crusade. One of the significant cases was that of a 2-day old baby who was adopted by the compassionate man of God, Apostle Johnson Suleman.
The baby’s case stirred emotions in Suleman when family members who brought him to the crusade ground narrated in tears how his mother had died right after his birth.
With the clarity of spiritual hindsight, the Oracle of God announced to the congregation that the baby was the next target of the evil attack after his mother, therefore, he was going to adopt him. 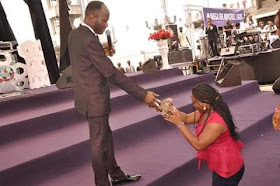 After praying for the child and family, he offered to assume full responsibilities over the child promising to open a bank account with the sum of N1,000,000 (one million naira) for his upbringing.
While invoking the power of restoration on many others that were plagued by various afflictions which include the lame, the deaf and dumb, and the penniless, Suleman noted that though many are caged by satanic manipulations, God is enough to rescue all from troubles and limitations. 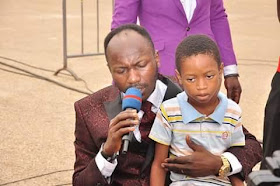 On what drives his confidence, the Oracle of God says God is it. “What drives confidence in life is an awareness of the fact that God is called the author and finisher, alpha and omega. In other words, when He starts a thing, He can and will surely finish it. This is what drives my confidence. Whatever God starts He does not abandon.”
‘The Ebenezer’ comes to an end in the evening of Sunday, 12th, 2017, while preparations begin in earnest for the ‘Help From Above 2017’ conference which holds between Monday 20th and Tuesday 21st, in Benin City, Edo State.
Source :LIB