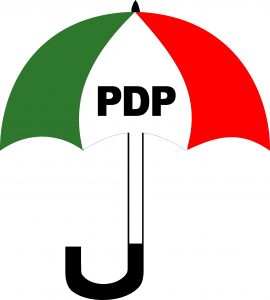 The South-east chapter of the Peoples Democratic Party (PDP) has passed a vote of confidence on the National Caretaker Chairman of the party, Ahmed Makarfi.
The resolution is coming on the heels of submission of the report of Strategy Review/Inter Party Affairs Committee led by Prof Jery Gana.
National Vice Chairman of the PDP, South-East zone, Chief Austin Umahi, who is also a member of the committee, yesterday, expressed optimism that the party after the implementation of the recommendations of the committee would become more united and better positioned to win elections. He commended the Makarifi-led National Caretaker Committee for being firm and fair, adding that with his wealth of experience and commitment, the PDP would soar above other political parties in the country.
Chief Umahi said: “The zone commends the Strategy Review/Inter Party Affairs committee constituted by Makarfi-led national Caretaker committee under the chairmanship of Prof Jery Gana for the thorough and painstakingly accomplished work which will not only strengthen the party but reposition it to take power come 2019”
Umahi said PDP controlled states in the zone are the most developed and economically viable, adding that Governors Okezie Ikpeazu (Abia), David Umahi (Ebonyi) and Ifeanyi Ugwuanyi (Enugu) have done the party proud by delivering democracy dividends to the people of their states.
Source :Sun

I Will Not Forgive and I will not forget those who...