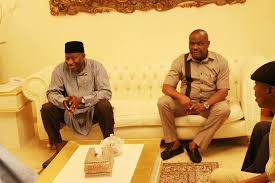 The meeting held inside the Government House in Port Harcourt.
Though the outcome of the meeting was not made known to journalists, SUNDAY PUNCH gathered that the meeting might not be unconnected with recent moves by leaders of the Peoples Democratic Party to resolve the crisis rocking the party.
Jonathan was received at the Government House by Wike at about 10.05am.
Present during the visit were the Chief of Staff to the Governor, Emeka Woke; Secretary to the State Government, Kenneth Kobani, and the Edo State PDP Chairman, Dan Orbih.
After the meeting, Jonathan was led on a tour of projects within the Government House.
Addressing journalists shortly after the inspection, Jonathan described Wike as a worthy representative of PDP.
He said, “I am part of Rivers State. I grew up in Rivers State and Bayelsa was carved out of Rivers State. Also, my wife is from Rivers State. Today is my first day of visiting Rivers State since Wike assumed office as governor. Twenty-two months down the line, I am quite impressed with what I have seen.
“If you are the chief executive of an institution, you stay for two years and you add no value, then you have no vision. Wike is doing well and we commend him. He is a good representative of the PDP, who is committed to developing his people.”
In his remarks, Wike said his commitment was to move the state forward.
He also thanked Jonathan for the visit, assuring him that he will continue to live up to expectations of Rivers State people.
Source: punch

Vic O threatens Don Jazzy with ‘Diss song’ if he does...