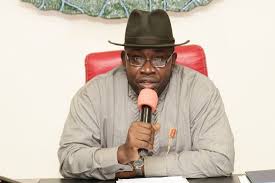 Governor Seriake Dickson, the Chairman of the PDP Reconciliation Committee,  has called on the Sen. Ahmed Makarfi-led Caretaker Committee  to step down in the interest of  the party.
The Bayelsa governor made the call while speaking with newsmen on Sunday in Abuja.
Dickson said the stage was now set for all the chieftains and elders of the party to  impress it on the caretaker committee to cede its authority to the Modu Sheriff-led  leadership.
“When the idea of making Sheriff the National Chairman of our party was hatched, I personally kicked against it.
“I also turned down all the overtures from Sheriff because I did not believe in him and what he did.
“So now, my position is that we have to move forward. I am a politician of conviction, I am not a politician of convenience and I am not a typical Nigerian politician,’’ Dickson said.
He said the party had come to a threshold when the right political decision should be taken to end the prolonged crisis.
“The Makarfi – led caretaker committee should remember that it was a brain child of the majority of party members including I at a convention in Port Harcourt.
“I  and up to 80 per cent  of the population of the PDP members were for Makarfi but the unfolding events have  compelled us to adopt a political resolution instead of embarking on further bickering.
“As politicians and democrats, we must first obey the constitution and all other instruments of civil rule and  which  includes obeying the judiciary,’’ he said.
Source:punch