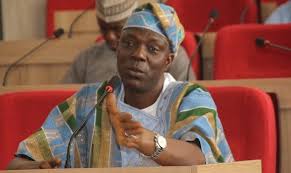 The Majority Leader, Kogi State Assembly, Hon. Prince Kolawole Matthew, has explained why he decided to quit his former party to All Progressive Party.

Kolawole who is representing Kabba/Bunu constituency in the Assembly was elected on the platform of Peoples Democratic Party before his defection alongside five others.
In a statement made available to our correspondent, by his Media Aide, Oloniruha Anthony, the lawmaker cited the unending crisis rocking the party as one of the reasons.
He also noted that his decision was reached after due, painstaking and extensive consultations with leaders and stakeholders within the constituency.
According to the statement, “The endless and protracted crisis in the PDP has badly aggravated the ability of the party to play its proper roles in the affairs of Kabba / Bunu, Kogi State and the Nation.
“The realisation that this crisis, which has defied all remedies is nothing but egocentric, intrigues and power play on the part of our party leaders, which makes my decision inevitable.
“In my desire to deliver on the mandate freely given to me by the good people of Kabba / Bunu, in terms of carrying out my primary assignment; lawmaking and attracting development, my movement to APC, the ruling party in the state will avail me a vantage position to perform my legislative duties effortlessly and impact more positively on the lives of our people.
“I have a strong conviction that the benefits of this move will be the defining moment for a secured, progress- inclined and prosperous Kabba / Bunu LG.”
He, however, urged support for Governor Yahaya Bello’s administration which he believes is impacting positively on the lives of Kogi people.
“I am positive about the New Direction Blueprint of the Executive Governor, His Excellency, Alhaji Yahaya Bello,” the statement reads.
Source:punch