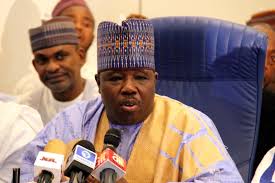 The National Chairman of the Peoples Democratic Party, Senator Ali Modu Sheriff, has said God will determine his political aspiration in 2019.

Sheriff, who spoke with journalists in Abuja, was responding to a question on whether he would vie for the PDP ticket for the presidency since he had given the members of the party the assurance that he would not vie for the party’s chairmanship position.
He said, “Every position I have occupied in life, God made it possible. I’m a firm believer in the will of God. I told you I would not run for the position of the chairman, the rest; I left it for God to decide.”
Sheriff stressed that he would not vie for the office of the national chairman of the party at its next convention. But he said he would not stop any member of his National Working Committee from testing his popularity at the proposed convention.
“But I, Ali Modu Sheriff, will not run for the office of the national chairman of the PDP,” he said.
He said he was still consulting on when the convention would hold, adding that he was going to meet some organs of the party before the end of the week. The organs of the party include the Board of Trustees, National Assembly caucus, National Executive Council and the Expanded National Caucus.
On zoning, Sheriff said the office of the national chairman of the party would remain within the southern part of the country, but said the party in the zone would determine which of the three zones would take the slot.
He said the presidential ticket of the party would go to the northern part of the country.
“I don’t know whether the office of the chairman will go to the South-West, but I know it will remain with the southern region. This is because the presidential ticket will go to the North. I also don’t know the area or the zone that will pick the ticket from the three zones within the region,” Sheriff said.
He insisted that he was never interested in running for the office of the national chairman in the first place, adding that he was persuaded to take up the responsibility.
The former governor commended the reconciliation committee headed by the Governor of Bayelsa State, Mr. Seriake Dickson, “for a robust and pragmatic recommendations in its report” which was submitted last week.
In an apparent reference to the members of the sacked Caretaker Committee headed by Ahmed Makarfi, Sheriff said they should agree with the terms of the agreement set by Dickson.
“For those who disagree with political solution and have been disparaging other members of our party, especially the members of the reconciliation committee, I implore them to, for the sake of unity and cohesion desist from such,” he said.
Meanwhile, the Chairman of the sacked National Caretaker Committee of the PDP, Makarfi, has vowed not to resign from office as suggested by the Dickson committee, saying only the party’s convention can make him to resign.
The former governor of Kaduna State stated this in a statement issued on his behalf by the spokesperson for the caretaker committee in Abuja on Monday, Prince Dayo Adeyeye.
Source:punch