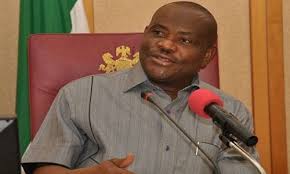 The Federal Government has said it cannot prosecute the 23 officials of the Independent National Electoral Commission, accused of receiving N360m bribe from Governor Nyesom Wike, in any court in Rivers State.

It cited security reasons for choosing to charge the defendants before the Federal High Court in Abuja and not any court in Rivers State.
The prosecution stated this in an affidavit it filed along with the charges which it instituted before the Federal High Court in Abuja against the 23 INEC officials on March 7, 2017.
The Office of the Attorney General of the Federation had, on March 7, filed seven counts against the 23 defendants for allegedly receiving N360m bribe from Wike in connection with the December 10, 2016 rerun elections in Rivers State.
The prosecution had alleged that the N360m bribe, which the 23 defendants allegedly received from Wike, represented proceeds of the governor’s criminal conduct as well as economic and financial crimes.
The accused persons are Shittu Mohammed Lamido (Shettima), Henry Owokure, Peter Ewetade, Mrs. Mary Jummai Tunkoyo Pennap, Gwatana Jibril, Ivase Stephen and Abdullahi Ogabo.
Also named as part of the defendants are Gayus Hassan, Hussaini Yahaya, James Ogwuche, Karimu  Aminu, Adedokun Najeem Ayotunde, Balogun Funmilayo and Adams Kadiri, Akinwande Adesoji, Lukeman Olabimpe and Tiamiyu Arowolo.
The rest are Akinwoye Amodu, Nwoha Yusuf, Patrick Anuke, Iro Abali, Nwosu Oluchi and Arukwe Chinelo.
All the 23 INEC officers had, through their lawyers, objected to being tried in Abuja, indicating their preference to be prosecuted in Rivers State, where the alleged offences were said to have been committed.
But citing an intelligence report by the police, the Federal Government, through the AGF office, alleged that thugs, loyal to the Wike-led administration, had threatened to “rise violently” against the trial of the perceived allies of their benefactor if the case was conducted in Rivers State.
The prosecution added that if the trial was conducted in the state, “the safety of witnesses, prosecutors, court officials and other civilians cannot be guaranteed.”
The document added, “That lives of security agents and civilians are usually in serious danger each time perceived allies of the present state government are being investigated.
That defendants in this case are being charged in respect of the gratification they received from the present Governor of Rivers State, Governor Nyesom Wike.
“That intelligence report reaching the Police Force Headquarters is that prosecuting the said defendants in the same Rivers State will constitute security risks to prosecutors, the court and witnesses and even innocent civilians as political thugs, loyal to the incumbent administration in the state, have vowed to rise violently in opposition to the prosecution of perceived allies of their benefactor.
“That the safety of witnesses, prosecutors, court officials and other civilians cannot be guaranteed in Rivers State if this case is prosecuted there.
“That it is in consideration of security of lives of prosecutors, witnesses, court officials and innocent civilians that this matter be heard before this division of the Federal High Court.”
The defendants were scheduled for arraignment before Justice John Tsoho of the Federal High Court in Abuja on March 14, 2017, exactly one week after the charges were filed before the court.
But the arraignment could not proceed after defence lawyers said they were objecting to the trial of their clients in Abuja not being where the alleged offences were committed.
The lawyer representing 20 of the accused persons, Mr. Ahmed Raji (SAN), said he had, on March 13, filed on behalf of his client, a motion challenging the territorial jurisdiction of the court in Abuja.
He insisted that by statute, a defendant must be charged where the alleged offence was committed.
He urged the court to suspend the arraignment until when the motion, challenging the court’s territorial jurisdiction, was determined.
Leading the prosecution at the March 14 proceedings, Mr. Kayode Alilu asked for time to respond to the motion.
But in the affidavit, which had been filed along with the charges, the prosecution recalled how a Deputy Superintendent of Police, Mohammed Alkali, and Sergeant Peter Uchi of the 48 Police Mobile Force were “gruesomely murdered and beheaded by thugs and cult gangs” on the day of the rerun elections in Rivers State despite the deployment of law enforcement agencies ahead of the exercise.
The affidavit also stated that before the elections, three other policemen and four operatives of the Nigeria Security and Civil Defence Corps had been “gruesomely murdered at Omoku and Ido Camp of Agip Oil Company, Obiafo community.”
The document stated, “That the late DSP Mohammed Alkali and Sergeant Peter Uchi were ambushed, gruesomely murdered and beheaded by political thugs and cult gangs in Rivers State.
“That shortly before the election three personnel of the Police Mobile Force, Squadron 19 and four personnel of the Nigeria Security and Civil Defence Corps were gruesomely murdered at Omoku and Ido Camp of Agip Oil Company, Obiafo community respectively.
“That all arrested cultists and political thugs during the elections confessed to have been sponsored by some politicians in the state.”
It stated that during investigation into the crimes committed during the rerun elections, many eyewitnesses and victims refused to give information to the police out of fear of being killed by cult groups.
“That the few individuals, who braved the odds to meet the team of investigators, expressed their concern that informants could alert cultists to go after them.”
Justice Tsoho had, on March 14, fixed April 7 for the hearing of the defendant’s objection to their trial in Abuja.
Source:punch