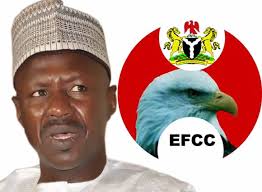 The anti-corruption war suffered a setback last week when, seizing on the missteps of the Presidency, the Senate roundly rejected the nomination of Ibrahim Magu as the substantive Chairman of the Economic and Financial Crimes Commission.  It was the second time that Magu would come up for confirmation and, like the first, the man who has led the rejuvenation of the assault on graft was tripped up by the hostility of a compromised political class and an ambush from his own corner. Muhammadu Buhari should take responsibility for the mess and tidy up his house to save his presidency.

The hearing was a national show of shame. It suggested dysfunction in Aso Rock and depicted the President as distracted. The entire Magu saga has been badly handled from the start and Buhari stands the risk of seeing his major electoral asset — a resolute anti-corruption stance — go down in tatters.

For the discredited Senate, Buhari and his spy chief handed it a remarkable gift. Lawal Daura, Director-General of the State Security Service, caused to be sent to the legislators a report that laid several allegations against Magu and added a clincher: that the nominee had integrity issues that could prejudice the anti-corruption war. It was the opening the senators were waiting for. At least 10 of them are either being prosecuted or investigated for corruption, with the Senate President, Bukola Saraki, leading the pack. It would take an angel to further empower his own nemesis.

It was a slap on Buhari’s face and demonstrated the lack of cohesion in the ruling party and its ability to govern as the anti-Magu forces were mainly from its own ranks. The general perception is that the National Assembly is a den of greed and corruption and lawmakers would do everything possible to kill the fledgling war on graft, beginning with evicting Magu. But Buhari played into their hands.

Senators can rightly claim — and Saraki has been so preening since their “victory” — that they dutifully carried out their constitutional duty. It is doubtful that this was done without bias. The tradition of the Senate has always been that any presidential nominee for screening gets the support of at least two out of the senators from his state to scale through. Magu had no opposition from the three of them from Borno State, according to Ali Ndume, the former Senate Leader. Yet, he was rejected. Daura too will rightly argue that he was only executing his lawful assignment. That is as far as it goes. The conviction among Nigerians is that very powerful forces are moving against the anti-corruption drive and Buhari had better rouse from his slumber or see his anti-corruption campaign falter.

Some have also rightly pointed out that Magu is not the only one that can get the job done. In a country where talents abound, we agree that there are many who can be tapped to replace Magu.

However, the President should demonstrate his ability to govern by re-asserting his authority over his own administration. He has goofed badly. This began when he inexplicably delayed sending Magu’s name to the Senate for confirmation after appointing him to act in November 2015. It was while he was away in July last year that Vice-President Yemi Osinbajo sent it. The Senate sat on it and later in December acknowledged receipt of the damning SSS report. That was embarrassing enough. It suggests that the SSS either did not brief him on its findings on Magu or he was inattentive. The Senate promptly dumped the nominee.

Is the President a captive of his SSS DG? After asking the Attorney-General to investigate the matter, and Magu responded point-by-point to the allegations and Buhari declared himself satisfied and re-presented Magu for confirmation, why would the agency re-send the report? The confusion had deepened when the SSS sent a second report on the same day, clearing the nominee. Buhari bungled this: he should have withdrawn Magu’s nomination based on the report or put his wobbly house in order. A strong leader should not allow personality clashes and inter-agency rivalry to snowball so embarrassingly into public limelight. Buhari comes out the loser in all this. Not only has his well-regarded nominee been twice bloodied by the Senate, his reputation as a disciplinarian has taken a bashing.

He should take charge or delegate more duties to his deputy and other competent officials. The widespread and long-held perception of a clannish, self-serving cabal running the country in his name is ringing ominously louder. His close ally, Nasir el-Rufai, the governor of Kaduna State, alleged it in a recently-leaked memo, just as the First Lady, Aisha, did months ago.  He is the architect of his own troubles, having failed to learn from the similar empowerment of a cabal by the late President Umaru Yar’Adua that created a constitutional crisis in 2010 when he died in office. When you ring-fence yourself with aides drawn mostly from your ethnic group, you get power schemers pretending to be serving you, while aggrandising themselves and endangering national cohesion.

Buhari can still salvage the situation and turn adversity into strength. For the way he went about his job, he should immediately replace Daura. In the United States, it is acknowledged that FBI Director, James Comey, was doing his job, but by deliberately inserting himself into the November 2016 Presidential election, he won public odium and calls for his removal. As we have canvassed before, Buhari should name and empower a coordinator for the anti-corruption war and stamp out inter-agency rivalry.

For the EFCC, if he still believes that Magu is the best man for the job, he should cause the SSS to withdraw the discredited report and re-present him. If not, he should appoint an upright, incorruptible professional and re-assign Magu. The main priority now should be regaining the momentum and demonstrating that he is indeed in charge. The war on corruption must not waver.

Saraki, who, last week, in Kogi State, underscored the need for the National Assembly to rediscover itself, should appreciate the fact that using voice-vote in taking crucial decisions in the parliament is otiose. It does not make room for transparency and accountability to the people. That abuse should stop with the Magu saga. The electronic voting system in the parliament should be activated.