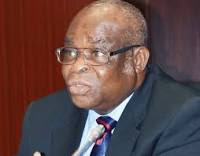 The Eastern Bar Forum (EBF) of the Nigerian Bar Association (NBA) has urged Acting President Yemi Osinbajo to forward the name of Justice Walter Onnoghen to the Senate for confirmation as Chief Justice of Nigeria without further delay.

In a communiqué issued at the end of its quarterly meeting in Umuahia, Abia, the group warned against a constitutional crisis with regards to the judiciary.

The group described Onnoghen’s non-confirmation as a “vexed issue of neglect” by the President despite his recommendation by the National Judicial Council (NJC).

EBF said it aligns with the position of NBA that the President, in national interest, should to abide by the provisions of the 1999 Constitution which he swore to uphold and defend.

“The present impasse is a recipe for constitutional crisis which will engender and precipitate instability particularly in the judiciary and generally in the legal profession.

“The Forum, therefore, considers it pertinent to implore the executive arm of the government to respect and implement the concept of separation of powers as enshrined in the 1999 Constitution by forwarding the name of Justice Onnogben who had been recommended by the NJC to the Senate for confirmation as the CJN prior to his present appointment as Acting CJN,” EBF said.