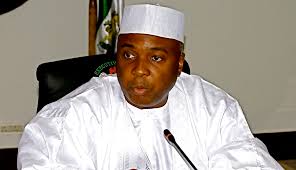 The Senate on Thursday confirmed the nomination of 45 out of the 47 ambassadorial nominees submitted to the upper legislative chamber by President Muhammadu Buhari.

The confirmation followed the adoption of the report of the Senate Committee on Foreign Affairs which made the recommendation.

Chairman of the screening panel, Senator Monsurat Sunmonu, who presented the report, said Nsofor was rejected due to his frail looks and temperamental disposition.

She added that the octogenarian also declined to recite the National Anthem when asked by the committee to do so during the screening exercise.

Sunmonu also said Daudu was rejected based on security report from the Department of State Services (DSS) which described him as “deceitful and corrupt” while in public office.

He was once the chairman of the Ondo State Agency for Road Maintenance and Construction, as well as Commissioner for Physical and Urban Planning in the state.

President of the Senate, Bukola Saraki, urged the ambassadors-designate to be of good conduct in their countries of sojourn.

He also enjoined the Federal Government to pay up all outstanding salaries and allowances being owed foreign missions to enable them deliver on their mandate.