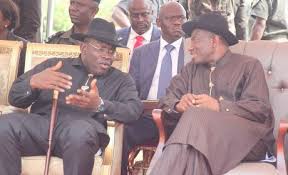 Former President Goodluck Jonathan has thrown his weight behind the Governor Seriake Dickson-led Peace and Reconciliation Committee, insisting that a political solution remains the best option to tackling the ongoing crisis in the Peoples Democratic Party (PDP).
The ex-Nigerian leader who received the governor and members of his committee in his country home at Otuoke, Ogbia local government area, Bayelsa State, urged the contending parties to embrace compromise and negotiations as a way out of the current challenge.
Jonathan , who made the remarks after receiving the report of the peace Committee, thanked the Dickson-led committee immensely for its good work.
He specially commended the governor and his entourage for going round the country to meet with key stakeholders and leaders of the party in order to return peace to the PDP.
He said he believed that a political solution remains the best means of resolving the crisis in the party, noting that Dickson and his Committee deserve all the encouragement.
Dr Jonathan expressed reservation over the use of courts to settle purely political matters, stressing that a political solution would ensure a win-win outcome for the warring groups within the party.
“ I believe a political solution remains the best means of resolving the crisis in the party and that’s why the Dickson committee must be commended.
“No two parties go to court and come out smiling especially for a political party like the PDP that’s in the opposition”, the former president opined.
Jonathan, who gave instances of people who went to court and at the end, did not get the desired result, insisted that courts should ordinarily have no business in deciding who should be the chairman of a political party.
The former president called on the parties to submit themselves to a political solution and expressed hope that it would finally rest the protracted crisis.
Governor Dickson in his remarks, before presenting the report to the former President, aligned himself to some of the remarks made by Engr Aba Gana, a former Minister of the Federal Capital Territory (FCT), who had earlier spoken.
Honourable Dickson added that Bayelsa State has benefited substantially from the PDP, declaring that the party remains the only one that has given the position of President to Bayelsa, a minority.
Before presenting the report to Jonathan, Dickson expressed Bayelsa’s indebtedness to the PDP, insisting that it is a thing of pride to work to ensure that the crisis in the party is finally resolved.
Earlier, the presentation of the report had been preceded by introductory remarks by a member of the PDP Board of Trustees (BoT) and former minister of the FCT , Gana, alongside other members of the committee .
Engr. Gana paid glowing tributes to the remarkable leadership quality of governor Dickson as a peacemaker, commending his effort at pushing the peace process.
“ He has pushed the process so relentlessly to the extent that the success of finding a lasting resolution of the crisis has become evident”, Gana said.
He also commended former President Jonathan for conceding defeat to President Muhammadu Buhari at the time he did.
He maintained that that singular move restored peace to Nigeria and averted the looming crisis that would have consumed a number of lives.
Gana noted that a leader who could achieve that feat effortlessly, would even do much more to restore peace in the PDP.
Source:sun

Ojukwu would have saved the Nation from Blood bath if he...