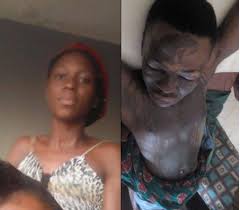 The 24-year-old Akwa-Ibom indigene, Iniubong Ime, who was bathed with acid by his ex-girlfriend on the night of Monday, March 6, 2017, has said he has forgiven her and bears no grudge against her.
Ime and his erstwhile girlfriend Lucy dated for about a year. The relationship was a troubled one, with Lucy being the source of quarrels between him and everyone close to him. Tired of the nuisance she  always created, Ime called off the relationship, got Lucy a job and an apartment.
Ime said the breakup was not peaceful, adding that Lucy started stalking him.
Daily Trust reports that, “Sometimes, when she spots me with anyone, male or female, she wouldn’t care to know who the person was and would just begin to insult them,” Ime said.
And on March 6, 2017, Lucy knocked on Ime’s door and bathe him with acid as soon as he opened the door. She ran away but her mother handed her over to a Local Government chairman, who was to hand her over to the police the next day. She, however, escaped from the chairman’s custody and she’s still at large.
Reminiscing on the events of the fateful day, Ime said he was happy to be alive, adding that he forgave her the day the incident happened.
He said, ” Our major concern now is for me to recover. My treatment bills are being footed by my family and friends and it has not been easy. You know that injuries of this magnitude need a lot of care and money. So, I will appreciate if government at any level, interest groups and kind-hearted individuals can come to my aid so that I can recover.
Vengeance “wouldn’t solve anything. I have decided to let it go and forgive her. In fact, I forgave her from the very day it happened. I thank God I’m still alive. I won’t take her back because I had long broken up with her before the incident. But I can relate normally with her. I have no hard feelings towards her. We won’t be lovers again, but she won’t be my enemy either. “
Source:punch