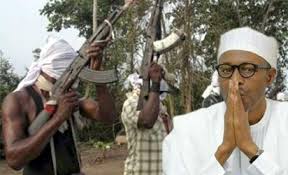 A political group, the Coalition of All Progressives Congress Support Groups, has commended President Muhammadu Buhari for his initiative and intervention to end the lingering crisis in the Niger Delta.

The group, in a statement on Monday by its National Publicity Secretary, Ambassador Sokari Afiesimama, noted that the Federal Government’s deft move to end the crisis in the Niger Delta was a clear indication that the government was poised to develop the region.

The group stated that the recent move by Vice-President Yemi Osinbajo on behalf of his boss, President Buhari, was attracting wider acceptance and applaud across the region.

It said, ”We observed that the process is getting quicker acceptance for collaboration and intervention to end the over prolonged crisis in the region

”We, therefore, commend the Vice President to have led a team of rescue missioners such as  Minister of State for Petroleum Resources, Dr. Ibe Kachukwu;  the Minister of the Niger Delta, Pastor Uguru O. Uguru; Special Adviser to the President on Amnesty, Brig.-Gen. Paul Boro (retd.),  on rescue parade to meet the grassroots people. The development has no other implication but to truly end youth restiveness and militancy.

”We hereby urge all indigenes of the region to explore the concept to discourage those factors that have caused gross damage to the environment and the oil and gas sector. We advise Niger Delta indigenes to see the opportunity as one to build good pleasantries to reciprocate President Buhari’s good gesture.

”We are urging all Niger Delta citizens to now rise above bigotry and regional sentiments, but fish out and report desidents, unscrupulous and treacherous activities to the government for the realisation of development, peace and security in the region.”

The coalition said that  their national chairmen would soon engage in tour of the Niger Delta in order to directly meet with stakeholder to design a direct connect with the support groups at the states and local government areas for participatory process at the 2019 general elections.

The statement noted, ”No better time than now for us to embark on the tour in order to harness the opportunity to build improvement. It is our prayer that all stakeholders would quickly key into the activities and realise the promise of engaging 1,000 youths from the oil producing states.

”Thank God for Buhari and Osinbajo, quintessential leaders who are taking keen interest to factor out major pressing issues for remedy and to proffer lasting remedy to achieve the reasons for voting APC into power.