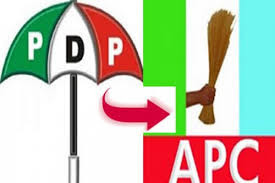 Thousands of members of the Peoples Democratic Party and the Labour Party from the two Isoko North and South Local Government Areas of Delta State on Sunday officially joined the ruling All Progressives Congress.

The defectors vowed to deliver the state for the ruling party in the 2019 elections.

The defection of PDP members, numbering hundreds, was coming at the time when the party had been factionalised in line with crisis rocking the party at the national level and becoming a major boost for the APC in the state.

Our correspondent gathered that the defection took place on Sunday during a meeting of the APC in Isoko Ethnic Nationality at Ozoro under the aegis of ‘Unity Consolidation’ which saw prominent politicians in the area including two former lawmakers, Mr Benjamin Efekodo and Mr Silas Buowe leaving for APC.

Speaking for the PDP defectors, Efekodo, who‎ represented Isoko South Constituency 1 in the State House of Assembly, hinted that they had decided to join the APC because they believe it was time for APC to take over governance in the state.

The ex-lawmaker assured they would mobilise for the APC to ensure it wins the 2019 General Elections in the state and as well as to enthrone good governance in the state.

The meeting also witnessed the fusion of the Labour Party in the area into APC. Over five thousand prominent members of the LP including a former running mate to Chief Great Ogboru in the last Delta State governorship election, Chief Peter Erebi also defected.

Erebi, a former President-General of Isoko Development Union, who spoke on behalf of the defectors said they had decided to join APC to rescue the state from the ruling PDP in the state.

The Leader of the party in Isoko Nation, Chief Lucky Esigie, while receiving the new members thanked them for their wise decision to join the party and promised to work with to deliver the state for APC.