Home Uncategorized Why Judiciary is perceived as corrupt, by ex-Supreme Court Justice
Spread the post 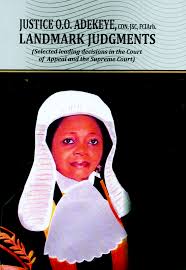 The perception in certain quarters that the nation’s Judiciary is corrupt is a fallout of the general misunderstanding about the operations of this arm of government, former Justice of the Supreme Court, Justice Olufunlola Adekeye (retired) has said.

Justice Adekeye faulted the general categorisation of the Judiciary as a corrupt institution. She argued that by its nature as a very powerful arm of the government, it was to the detriment of any country that accepts the labelling of its judiciary as corrupt.

The retired jurist spoke in Abuja Tuesday at the released of the second quarter report of court observations in the Federal Capital Territory (FCT) carried out by a group, the Rule of Law and Enforcement Initiative, also known as Partners West Africa – Nigeria (PWAN).

Justice Adekeye, who praised the initiative by PWAN, said it will enhance the understanding of the operations of the Judiciary and improve public confidence in the court, because justice is rooted in confidence.

“With this project, people can now have free accessibility to the court or the operations of the court. There is no secret about it. Members of the public will have access to the court and they will know what happens within the court system.

“There will be no room for misunderstanding, and to be saying the Judiciary is corrupt. They will have that power to criticise or to pass comments that will help the Judiciary to improve its services,” she said.

PWAN’s Programme Manager, Barbara Maigari, while presenting the report, noted that although there were improvements in the operations of courts in the FCT from when the first report was released last December, there was need to do more particularly in the area of free legal services.

The report recommended, among others the need for electronic recording facilities in court to enhance efficiency; need for the National Judicial council (NJC) to provide time frame for when court must sit and for the prosecuting agencies to be diligent in their duties to prevent delay in criminal cases.

Maigagri said her group’s exercise, under the theme: “Social accountability in the judicial sector project.” is intended to increase civil society’s access to government’s information as a tool to fight judicial corruption, enhance access to justice and expand the opportunity for citizen’s engagement with government.

Chief Judge of the FCT, Justice Ishaq Bello said he was convinced that the PWAN’s project, which provides an outside perspective to the operations of FCT courts, will “help us take a critical look at our operations, from a deferent eye, to access our activities.”

Represented by Justice U. A. Musali, Justice Bello said the activities by PWAN “will help the public understand us better and vice versa. It will build further understanding about the judicial process and the challenges we face.

“We will look at the recommendations critically and make amend where necessary and eventually improve on our integrity and strengthen the judicial system,” Justice Bello said.

Photo Of The Day: Mama Taraba Firstday In Office As Women...

Osinbajo’s trip to India not cancelled-Presidency