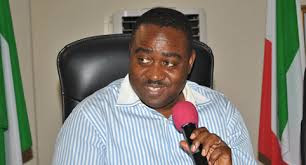 The failure by the Department of State Service (DSS) to produce former Benue State governor, Gabriel Suswam stalled proceedings in his trial before a Federal High Court in Abuja Tuesday.

Suswan and Omadachi Oklobia (who served as Finance Commissioner in Suwam’s government) are being triedby the Economic and Financial Crime Commission (EFCC) for allegedly diverting N3.1billion belonging to Benue State Government.

They are, among others, accused of diverting proceeds of the sale of shares owned by the Benue Government and Benue Investment and Property Company Limited, for their personal uses.

The case was fixed for Tuesday for the continuation of the prosecution’s case. But at the commencement of proceedings, prosecuting lawyer, Oluwaleke Atolagbe drew the court’s attention to Suwam’s absence in court.

He noted that Suswam was on bail and wondered why he was absent, but said his (Suswam’s) lawyer should be allowed to explain his absence.

Suswam’s lawyer, Joseph Daudu (SAN) said his client’s absence was not out of disrespect to the court, but to no fault of his.

Daudu said Suswam was invited by the DSS on February 24 this year. And that since then, he has been kept in detention without charge.

He said no effort has been made by the DSS to take him (Suswam) to court in respect of whatever allegation they may have against him.

Daudu said: “The 1st defendant (Suswam) is being prosecuted by the Federal Government of Nigeria (FGN) in this case. The last place he was seen is in the custody of an agency of the FGN, the DSS.

“So, if the prosecution is not aware, I am, by this statement from the Bar, making him to be aware, so that he can enquire why the 1st defendant is being kept by the DSS.

Responding, Atolagbe said the agency prosecuting Suswam in this case was the EFCC, which is different from the DSS, which currently is holding him.

Atolagbe added that “they are two different agencies entirely.” He however, agreed to Daudu’s observation that there was need for an adjournment in view of Suswam’s absence.

Ruling, Justice Ahmed Mohammed noted that the case, being a criminal matter, could not proceed in the absence of the 1st defendant. He adjourned to May 9 for continuation of trial.