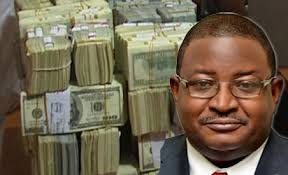 Yakubu had sued the Economic and Financial Crimes Commission (EFCC) and the Attorney General of the Federation (AGF) over his detention by the former in relation to the about N3billion cash allegedly recovered in his Kaduna home.

The ex-NNPC boss has since been arraigned on a charge filed by the EFCC and has been granted bail.

Yakubu’s lawyer, Adeola Adedipe told the court today that, in view of the intervening circumstances, from when the case was filed and now, his client has decided to discontinue with the case.

Adedipe noted that since his client has been properly charged to court and bail granted to him, “We considered it necessary to discontinue this action.

“With a view to securing an order of striking out, we have filed a motion this morning, seeking the court’s leave to discontinue the case. We have served on parties,” Adedipe said.

Lawyers to EFCC and AGF, Mrs. Rita Ogar and T. D. Agbe confirmed being served with Yakubu’s motion. They did not oppose it.

Ruling, Justice Ahmed Mohammed struck out the case in view of the non-opposition by the respondents.