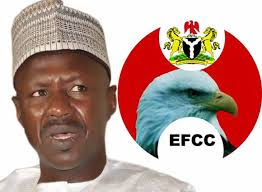 The Senate has protested against the retention of Mr. Ibrahim Magu as the Acting Chairman of the Economic and Financial Crimes Commission despite the rejection of his nomination by the lawmakers.

Several senators, at the plenary on Tuesday, spoke against the consideration of a letter from the Presidency requesting legislative approval for the nomination of 27 Nigerians as Resident Electoral Commissioners of the Independent National Electoral Commission.

They insisted that the process be abandoned until Magu was removed.

According to the lawmakers, the rejection of Magu’s nomination by the legislature meant that he could not remain the Acting Chairman of EFCC.

President of the Senate, Senator Bukola Saraki, had, last Thursday, read a letter from Vice President Yemi Osinbajo, while he was Acting President, in which he sought legislative approval for the nominations.

But on Tuesday, the lawmakers rejected the consideration of the request, insisting that their earlier decision on Magu be effected by the Executive.

Raising a point of order when the session got to the consideration of the request, Senator Peter Nwabaoshi, urged the lawmakers to consider the example of the United States of America where, recently, the National Security Adviser was sent to the Senate but due to his belief in Russia, he was disqualified.

He said, “Recently in this Senate, we have dealt with the issue of confirmation but where are we today? The Chairman of the Presidential Committee on Anti-Corruption, Prof. Itse Sagay, went to the press and said that the Senate merely confirms. This is unexpected of somebody who had lectured Constitutional Law in the university; a Professor of Law; a Senior Advocate of Nigeria and, of course, the chairman of such a big body to say that the legislature merely confirms; that is, the legislature has no power.

“Here are we again today, now being given a list to confirm and we ‘merely confirm.’ Look at the list here, we have eight of them here out of 27 for reappointment, which means they are acting already; they are already working and they are still in position.

“Prof. Sagay will cite, again, Section 171 of the Constitution. You can imagine the kind of advice that this kind of persons are giving to Mr. President. They are telling Mr. President to disregard and disrespect the institution the legislature.

“Let us not take such a precedence. We cannot destroy our democracy because certain persons or individuals feel that it is only their belief or what they want is what will happen in this country. This country does not belong to them; this country belongs to the Nigerian people. The Nigerian people have elected us; they have given the power to look into those names sent to us for confirmation; to look into their credentials.”

Nwabaoshi said the Senate should not ignore Sagay’s choice of words on the legislature.

“My position on this matter is that since our confirmation is ‘merely,’ let us suspend it until we know whether we have the power as given to us by the Constitution to look into confirmation matters or any other status.”

Results From Bayelsa As Announced By INEC