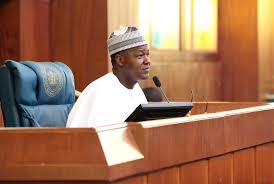 The Speaker of the House of Representatives, Mr. Yakubu Dogara, on Wednesday accepted blame on behalf of the Federal Government for failing to pay pensioners their benefits timely.

Many have died waiting to be paid their dues under the Defined Benefit Scheme and the Contributory Pension Scheme. Both schemes have been poorly funded by the government.

“The failure is on all of us; those of us in the legislature and those in the executive.

“I will not say the executive alone. All of us failed and we must accept the responsibility.

“I will accept the blame on behalf of the government and apologise to pensioners”, Dogara said.

He spoke at the National Assembly in Abuja when he met with a delegation of the Nigeria Union of Pensioners.

The group, which was led by the National President, Dr. Abel Afoloyan, said they came to the House as a last resort, having exhausted all avenues to get the government to pay pension benefits.

The speaker assured the elderly retirees that the House would take practical steps as from Thursday (today) by passing a resolution to summon top officials of the government to give explanations.

Speaking earlier, Afoloyan painted a pathetic picture of the pain of the pensioners.

“Pensioners have become endangered species and prone to all kinds of diseases, which are age-related and need money for treatment”, he told Dogara.

For example, he said while the total pension proposals on the DBS in 2017 was N302.4billion, the executive made a submission of N109.1bn, leaving a difference of N193.2bn.

Afolayan added that unfunded departmental liabilities for the DBS stood at N175.5bn for this year alone.

As for those under the CPS, he informed the speaker that there was a liability of N91.9bn in 2016, but that the government appropriated only N50.1bn.

To worsen matters, he stated that out of the N50.1bn, “only N18.8bn had so far been released into the Retirement Bond Redemption. ”

The union appealed to the National Assembly to consider placing pension funding under the First Line Charge “so that pension payment will not go through the traditional rigorous budgetary allocation process.”