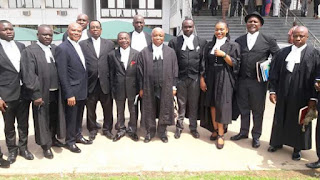 My Nwosu had via a motion sought leave of the Supreme court to appeal the ruling of the Owerri division of the Appeal Court staying proceedings in his matter pending at the court. At the last adjourned date the Supreme Court had struck out a similar motion from Nwosu for “being grossly incompetent as he failed to annex the original judgement of the Owerri High Court and the CTC of the relevant Appeal court ruling.

In suit SC 1046 filed by Mr Nwosu against Uche Ogah, Ikpeazu, INEC and PDP, he is canvassing the position that he is the only aspirant that signed the PDP primaries result sheet of 2014 and hence the natural successor to Ikpeazu if the high court finds his tax documents faulty.

In a brief ruling, the CJN reminded Nwosu that he also filed SC 739 against Ikpeazu on the same matter and subsequently adjourned the hearing of the motion for leave of appeal to 6th June 2017, after the expected judgement on Uche Ogah versus Ikpeazu on the 12th of May 2017.

Legal observers who were present at the court today contended that if the May 12th ruling of the Supreme Court favors Governor Ikpeazu the substantive case of FN Nwosu and Alex Otti at the Supreme Court will be academic.

According the Barrister Emeka Eze who is on the legal team of the Governor and his Special Adviser on Judicial/Legal matters, “the adjournment is a harbinger of things to come on the 12th of May and all supporters of Ikpeazu should be optimistic and remain steadfast as the balance of judicial precedence and facts of the matters in court favors the Governor immensely”.