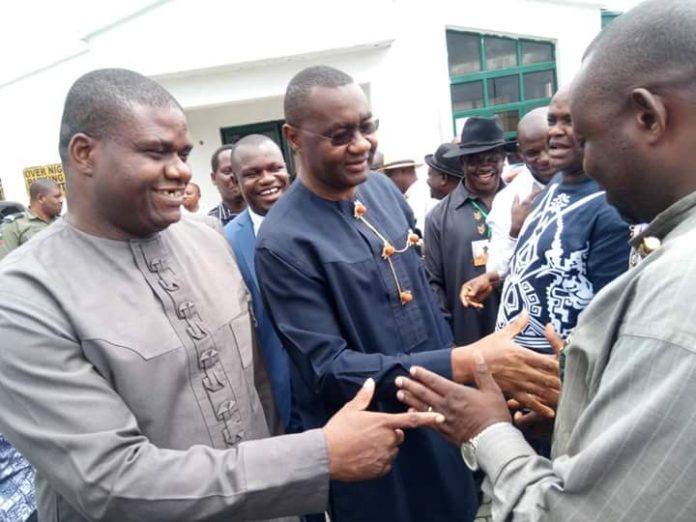 The Senator representing Rivers South-East Senatorial District in the National Assembly, Senator Magnus Ngei Abe, has advised members of the All Progressives Congress (APC) in Rivers State not to be intimidated as they prepare for the 2019 general elections.

Abe, spoke at K-Dere community in Gokana Local Government Area of the state, during an event where members of the youth wing of the People’s Democratic Party (PDP) declared for the APC.
The senator assured members of the APC that intimidation and harassment of our members that characterized the 2015 general elections will not be allowed to re-occur in 2019.
He said, “PDP members have one head like any one of you here. Therefore, do not allow them to intimidate you during the electioneering campaigns. Don’t be intimidated by their fiery statements. Don’t be cowed by their political positions. Don’t be cowed by their wealth or retinue of aides.
“You have nothing to fear when you are on the path of truth. Eschew violence and hate speeches. All you have to do is to propagate the policies and programmes of the APC. Tell the voters why you believe that your candidates are better suited for leadership than the candidates of the PDP who are vying for the same positions.

“I have driven through the roads in Gokana on Saturday and Sunday, and I have seen how bad the roads are. I have seen pervasive poverty in the land. Won’t your lives be better if you have someone from Ogoni in Government House?
“All ethnic nationalities in Rivers State have someone that is qualified to be the governor of the state. However, we in Ogoni are saying that we should be supported by other ethnic nationalities in the state to have someone from Ogoni as governor of Rivers State in 2019. We are appealing to them to join hands with us to make the journey easier for us all.”
Abe informed APC members, supporters and former PDP members who decamped to the APC that the internal wrangling in the leadership of the Rivers State APC would be resolved through ongoing intensive consultations.
He said, “The national leadership of the APC has stepped into the matter and I am sure that whatever difference that have emerged would be amicably resolved as we move along. I want to advise that we should refrain from making statements that would further aggravate the situation.

“There are bound to be differences in political parties but the ability to resolve such differences without rancour makes the party even stronger. We left the PDP due to pervasive injustice, impunity and disregard to internal democracy. Therefore, we would not toe the path of the PDP.”
The senator thanked the youths of Ogoni for the peace that have returned to Ogoniland, saying, “We Ogonis are one. We should not allow politics to tear us apart. We in the APC believe in peaceful persuasion. Please do not force anyone to join you. Please do not threaten anyone.
“Governor Nyesom Wike told the people of Rivers State when he was campaigning to be governor in 2015, that Rivers State has never being in opposition. He said he wanted to become governor so that he can take Rivers State back to mainstream politics.
“He declared that Rivers people were suffering because the state government was in an opposition party. In 2019, we in Rivers State APC want to return the state to mainstream politics so that our people can benefit from the federal government.
“Today, what you can get from the APC controlled federal government with a phone call continues to drag for over a year. So, we want a situation where we can strike a synergy with the federal government. Rivers people deserve the best. And from what obtains at the moment, Rivers State is too far away from the federal government. An APC government in the state will change all that.”
Speaking on behalf of his group while defecting in K-Dere community, Precious Abaa, stated that members of the PDP youth wing in Gokana decided to decamp to the APC because they were being marginalized in the PDP.
Abaa said, “All what we were promised by the PDP during the 2015 general elections have turned out to be a mirage. We are tired of oppression. We are tired of being marginalized. We are tired of being alienated.
“We from the Ogoni axis are treated like strangers in the PDP. We have decided to join the APC so that we can get the attention of the federal government. We need jobs. We need projects that will create jobs for our youths in Ogoni.”

Money POLITICS”: The BANE OF Nigeria’s Political Growth And...