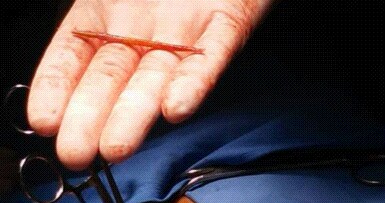 Australian surgeons, who treated a 70-year-old woman suffering from severe abdominal pain, said they found a toothpick stuck in the patient’s swollen gut.

The doctors in Victoria State’s capital Melbourne said the toothpick was lodged in an inflamed area of the colon of the woman.

The woman usually visit the hospital four times in a month for the pain, according to their report in the BMJ medical journal released on Wednesday.

The surgeons said they believed the “toothpick impaction” had pierced the woman’s colon and “exacerbated her symptoms.’’

The surgeons said initial medical scans showed no evidence of perforation or any foreign body in the woman’s gastrointestinal system and the case highlighted the importance of considering such items in patients suffering from these bowel conditions.

Their patient has since recovered.

“Toothpick ingestion is an uncommon but potentially fatal cause of acute abdomen,” said the doctors.

“The reported mortality associated with perforation from toothpick ingestion is 9.6 percent, and of these patients 38 per cent died in spite successful removal of the toothpick.

“The main risk factors for ingesting toothpicks included meals containing the small sticks and accompanied by alcoholic beverages, and a habit of chewing the items,’’ they said.

Many patients “are not aware of toothpick ingestion.’’

FG To Revive Refineries By 2019 – Kachikwu