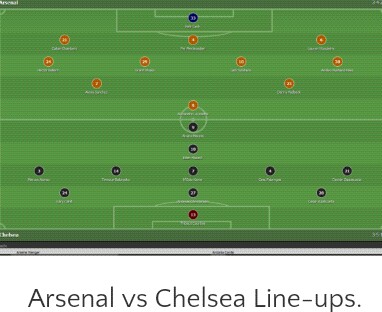 Momentum is high ahead of tonight’s fixture of the English Premier League between top flight Arsenal and rave of the moment Chelsea.

See match info and line-ups below

WHAT THE MANAGERS SAY

Arsenal manager Arsene Wenger:“In football, there’s only one thing and that’s the next game.

“We know that our home form will be absolutely vital and we just come home from West Brom frustrated because we lost two points. We know it puts us under even more pressure to deliver a big result tomorrow.

“The target in 2018 is to win every single game, and the next one is Chelsea.”

Chelsea head coach Antonio Conte: “We face five tough months because we have to fight for a place in the Champions League and it won’t be easy to reach this target.

“I think now [Manchester] City have created a big gap between them and the other teams, but at the same time we have to try to put everything into every game to try to get three points and put a bit of pressure on the teams above us.”

Arsenal’s 3-0 win in the corresponding fixture last season is their only victory in the last 12 Premier League meetings (D4, L7).The Gunners have failed to score in seven of the last nine Premier League encounters against Chelsea.Chelsea have won five away matches at the Emirates Stadium in all competitions, a joint high with Manchester United.There have been six red cards in the last seven fixtures between these sides in all competitions, with Chelsea having a player sent off in each of the last three.

The Gunners are unbeaten in six league games, their best run since a 13-match streak between August and December 2016.Arsenal have won 13 of their last 15 league games at home. The exceptions, both last month, were a defeat by Manchester United and a draw with Liverpool.Arsene Wenger’s side have scored in 24 consecutive Premier League home matches since a 0-0 draw with Middlesbrough in October 2016.They have conceded at least three goals in four of their six league fixtures against the other teams that finished in the top six last season.Petr Cech is one clean sheet away from becoming the first goalkeeper to record 200 in the Premier League. He played 333 league matches for Chelsea between 2004-2015.Jack Wilshere could start six consecutive league matches for Arsenal for the first time since September to October 2013.This is Arsene Wenger’s 60th meeting against Chelsea in all competitions, making them the side he has faced the most as Arsenal manager (W22, D16, L21).

Chelsea’s only Premier League away win in the last four attempts came at Huddersfield on 12 December.They could lose three successive London derbies in the Premier League for the first time since October to December 2001, when they were beaten by West Ham, Charlton and Arsenal.However, they have taken 13 points from their past five league games.The Blues could become the first team this season to keep five consecutive clean sheets in the Premier League.