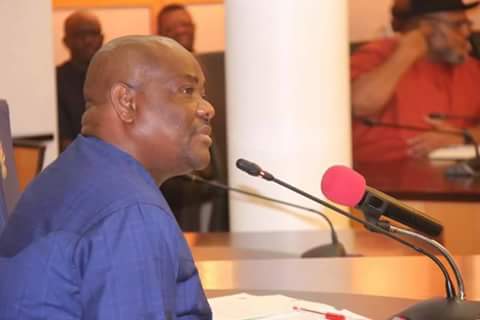 Rivers State Governor, Nyesom Ezenwo Wike has declared that national development has been stunted because of mentally challenged Ministers like the Minister of Transportation, Chibuike Rotimi Amaechi.

The governor said the recent outings of Chibuike Rotimi Amaechi confirms that his mental status is degenerating very fast.

He spoke at the Government House Port Harcourt on Wednesday when the management of the Silverbird Group presented his nomination letter as the Silverbird Man of the Year, 2017.

He said: “Former Rivers State Governor, Chibuike Rotimi Amaechi has a serious mental case. This is what makes it difficult for him to appreciate the seriousness of security issues .

“That is the kind of people that we have in the Federal Cabinet. With such people, it is impossible for the country to make progress. He needs urgent medical attention “.

Governor Wike said based on Amaechi’s logic, President Muhammadu Buhari needs to resign because of the nationwide breakdown of security. He said national security is the direct responsibility of the President.

He described as ridiculous the false allegation by the Former Rivers State Governor that he armed the perpetrators of the Omoku killings.

The governor wondered why the Minister of Transportation would prefer to blame him for the killings in Omoku, while refusing to blame the APC governors of Lagos, Benue, Kwara and Kaduna States for killings in their states.

Governor Wike said that the Minister of Transportation has deep-rooted connections with cultists, having sponsored a cultist rusticated from the state university as the Rivers APC Governorship Candidate.

He said: “Amaechi is the one who manipulates the posting of security heads to Rivers State using the Federal Government. They know what they are doing.

“If they are planning anything against Rivers State, they will not succeed”.

On the nomination for the Silverbird Man of the Year 2017 award , Governor Wike dedicated the award to God and the people of the state.

He assured that the New Rivers team will continue to work hard to move the state forward.

Earlier, the General Manager of Silverbird Group, Mr Jacob Akinyemi Johnson said Governor Wike emerged as the Silverbird Man of the Year 2017 after he garnered the highest number of votes online .

He said Governor Wike has been excellent by all standards . He said that the works of Governor Wike are visible across the state.

The General Manager of Silverbird Group said that the governor was nominated following the visit to project sites by the Nigerian Guild of Editors.