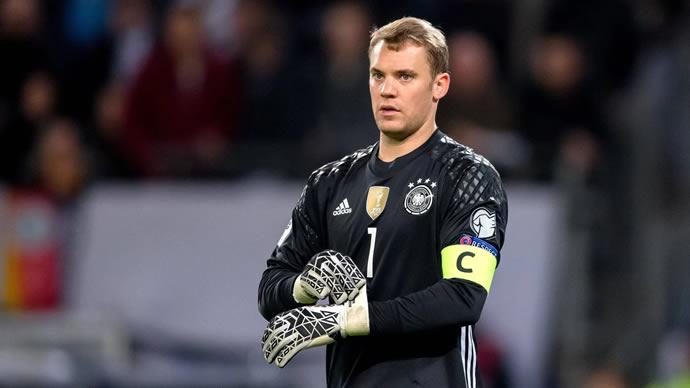 Manuel Neuer’s World Cup hopes were boosted on Friday when he made Bayern Munich’s squad for the German Cup final, after eight months on the sidelines, and his club coach Jupp Heynckes is convinced the goalkeeper will be fit for Russia 2018.

The 32-year-old Germany captain and goalkeeper has not played since fracturing his foot last September, but has been included in the squad, the first time since his injury, for Saturday’s final against Eintracht Frankfurt.

Neuer will start on the bench at Berlin’s Olympic Stadium with Sven Ulreich in goal for Bayern.

“He’s physically in top condition because he’s spent so much time in the gym and has been training well with the team, but he won’t start,” said Heynckes.

“I don’t have a specific plan for Manuel Neuer, but I do have a match plan and he’s part of that,” added Heynckes when asked if he will use Neuer off the bench.

Bayern captain Thomas Mueller has recovered from gastroenteritis, but Arjen Robben is out with a groin strain.

“Thomas Mueller has gotten over his infection and will take part in training today,” said Heynckes.

Making the cup final squad is a significant boost to Neuer’s hopes of being fit for Germany’s opening World Cup match on June 17 against Mexico in Moscow.

Heynckes is convinced the national goalkeeper will be ready for Russia 2018.

“I watched him train in the gym and he’s always said ‘I’ll make it (the World Cup)’, under the proviso that he had to be careful with the injury,” said the Bayern boss.

“My impression since last Friday is very positive.

“He has such a presence and authority in goal that you can’t compare to anyone else.

“He’s got too much class and talent, I think the nation can be relaxed in terms of him playing for Germany and being fit for the World Cup.”

Neuer has been included in the extended Germany squad for the World Cup, but will need to prove his fitness at a fortnight-long training camp which starts on Wednesday in north Italy.

Germany play friendlies away to Austria in Klagenfurt on June 2 and home to Saudi Arabia in Leverkusen on June 8 before the team fly to Russia on June 12.

Meanwhile, emotions will be high for the cup final as it is the last match in charge for both Heynckes, 73, who is going back into retirement, and Eintracht coach Niko Kovac, 46, who will take over as Bayern’s head coach next season.

“I thought my career at Bayern had ended in 2013 with the triple, coming back wasn’t part of the plan and I can’t predict what will happen after the final,” said Heynckes.

“I’m looking forward to it, when the emotions will be up.

“The venue in Berlin is Germany’s ‘Wembley’.

“It will be a highlight with Bayern, with my players.

“There has been a wonderful unity I have rarely felt in a team, which will make for nice memories.”

Kovac, 46, is in the unique situation of wanting to deny his future employers the league and cup double after Bayern won the Bundesliga title by a massive 21 points.

“Believe me, only the game on Saturday counts for me,” said Berlin-born Kovac.

“Everything that comes after that does not currently matter at all. We want to win the final.”