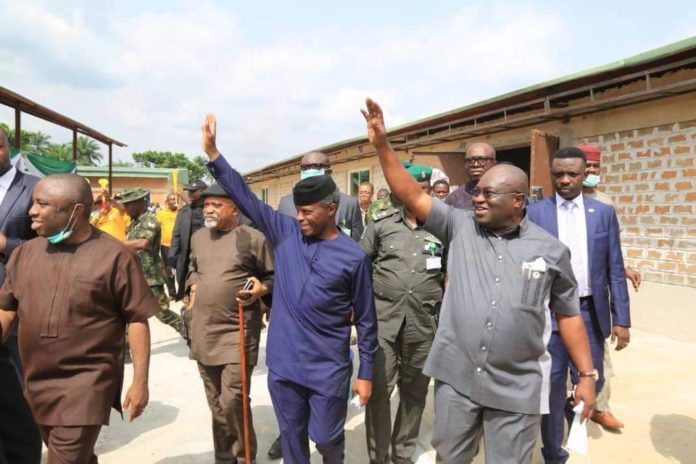 Similarly, Henry Frederic Amiel, the Swiss writer who lived in the 18th century posited in one of his works that quote “Great Men are the real Men: In them nature has succeeded”

Without doubt, the supposition of these two great philosophers easily concur with the accomplishment of another patriot of 21st century, Okezie Victor Ikpeazu PhD, who despite obvious challenges since assuming office as the Governor of Abia State, has laid concrete structure that brought renaissance to the state.

As a man of destiny, Governor Okezie Ikpeazu mounted the saddle with the mission to remodel and redefine the socio-political horizon of Abia State.

Like the Biblical Nehemiah who had the vision to rebuild the city of God, Jerusalem and restore its lost glory, Governor Ikpeazu, came with the divine mandate of putting Abia in the world map of commerce and economic bliss.

Governor Ikpeazu beckoned on Abia people to join in building a State whose socio-economic footing would be second to none in no distant future. By this clarion call on Men and Women of goodwill to join him despite their political leanings, Governor Ikpeazu displayed an uncommon conviction of humility, steadfastness and openness.

Realizing that fair play is good play, Governor Ikpeazu, no sooner than he made this call for all Abian irrespective of one’s interest or political disposition to join him in building a new Abia, began to lay foundation for a new state that should actually be the number one in both deed and character.

Suffice it to say that the road network he started building in the state from day one are quality roads being constructed by Grade A Contractors. Today, Abia has become a huge construction site; with road network crisscrossing the length and breadth of the State.

As part of efforts to reposition the Youths, his government sent some of the Micro, Small and Medium level manufacturers in Abia State to China for training to acquire better skills of manufacturing their goods. He had earlier led some industrialists in the state to Turkey and Brazil to interface with their counterparts in these countries.

On top of that, he set set up various training programmes one of which is Education for Employment; set up to make Youths and school leavers less dependent on white collar jobs and prevent them from criminal activities; thus laying credence to the assertion of Voltaire Marie Arouet, French philosopher and Writer that “Work keeps us from three great evils: boredom, vice and need’

Furthermore, to prosecute the war on poverty and under development, Governor Ikpeazu began an aggressive revolution in Agriculture and Rural development. The one ward, one project initiative is a clear and concrete step to make people live above poverty line and feel the impact of government.

This is in line with the postulation of Adam Smith; “No society can surely be flourishing and happy, of which the far greater part of the Members are poor and miserable”. As the first Governor from Ngwa extraction, Ikpeazu has brought good vision and strategy to governance to the extent that Abia is recognized today as Nigeria’s capital of Micro, Small and Medium Scale Enterprise (MSME) due to the motivating and potent crusade of the State government ably led by Okezie Victor Ikpeazu. The Made-in-Aba nay Madeactue-in Nigeria crusade has stood Abia State out as a major exporter of manufactured goods made-in Aba worldwide.

Also, the Ikpeazu’s government has consolidated on the gains of the previous administration by ensuring the provision of infrastructure to the nooks and crannies of the state, hence the endorsement and adoptions by various groups and communities in support of his second term bid.

With beautiful road networks built by the government in the seventeen Local Government Areas of the State, rehabilitation of dilapidated water Schemes, construction of bridges, including the first ever Flyover bridge in
Abia State being built at Osisioma including the remodeling of Enyimba city, South East’s Commercial nerve centre to serve as Africa’s Industrial hub, among other achievements, the Okezie Victor Ikpeazu administration has performed beyond expectation.

And so, it is proper and expedient to reward this hard-working Nehemiah of our time, Dr. Okezie Victor Ikpeazu with a second term by voting massively for him in 2019 Governorship poll. After all, the reward for hard work and diligence in service is more service.

Abia State House Of Assembly Speakership, Why Ikuku Is The Man

Abia APGA lies in state, as Ufomba, others return to PDP...