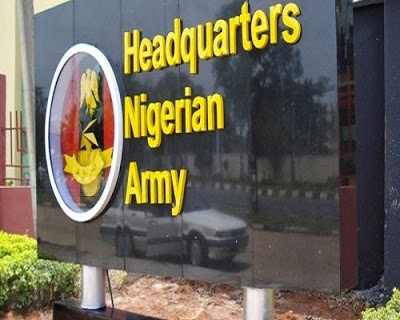 The Nigerian Military has accused Amnesty International of planning to publish a false report against members of the military operating in the North East.

According to a statement by the Acting Director, Defence Information, Brigadier General John Agim, the military has “credible intelligence” about the plan and that the report contains claims of fictitious rape incidents in internally displaced persons’ camps in the insurgency-ravaged North East.

The military is unhappy with what it says is becoming a frequent ritual by the human rights watchdog, which had previously accused it of rights violations.

In February and March, the military condemned two reports by Amnesty, the first accusing it of rights violations in its operations and the second accusing it of ignoring warnings about the raid by Boko Haram on Dapchi in Yobe State that led to the abduction of schoolgirls.

The military warned that the planned unsavory report by amnesty and such reports were capable of demoralising its members and hurting the war against insurgency.

“This malicious trend by AI is becoming a frequent ritual and it is rather unfortunate,” the statement read in part.

“In times like this, Amnesty International is expected to apply the natural law of liaison by working with security agencies as partners.

“This would have been the best way to ensure that insurgency and crisis are completely wiped off rather than engaging in falsehood, maligning the military and painting her in bad light at any slight opportunity.”
Amnesty International Plans To Publish ‘Malicious Report’ Against Nigerian Military – Defence HQFILE PHOTO: Nigerian soldiers sit on a military pick-up truck at a military base.
The military assured Nigerians that it remained committed to abiding by all human rights regulations endorsed by the country and carry out its constitutional role.

It, however, called on Amnesty to “desist from cooking reports from time to time to demoralise the entire military system and nation as a whole”.

Stressing that troops are sacrificing their lives in the fight against Boko Haram and other enemies of the country, the military called for an end to reports it described as fictitious.

“These false reports which are capable of derailing the good work being done by our patriotic and selfless soldiers must stop,” it said.

In March, while denying the claim by AI that the military failed to take action to stop the abduction of over 100 school girls from Dapchi, Brigadier General Agim had accused the human rights organisation of lacking credibility in its operations in Nigeria.

In his statement on Monday, he called on the organisation to carry out its activities with credibility.

“We are not in any way implying that AI should not do their job, but such must be done with a level of integrity and credibility by seeking clarification when the need arises,” he said.

“This way a lot will be achieved as both will form partners in the fight against extremism and other vices.”

Amnesty International has yet to react to the statement by the military.