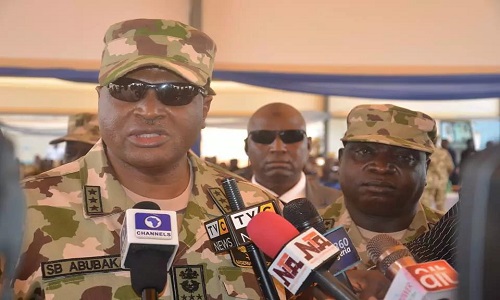 The Chief of Air Staff, Air Marshal Sadique Abubakar has inaugurated the permanent site of the Nigeria Air Force Institute of Safety, located at Rigachikun area of Kaduna.

Speaking during the Commissioning the permanent site of the institute, Air Force boss says the service is boosting the capacity of its officers and men to avert future air disasters involving its personnel and aircraft.

The Nigerian Institute of Safety was established in 2010 due to lack of funds, the institute was unable to move to its permanent site in Rigachikun, Kaduna state.

The permanent site for the institute has been completed and ready for use under the present leadership of Air Marshal Sadique Abubakar.

This commissioning ceremony, therefore, marks the official take-off of the institute.

The institute according to the Air Force authorities, provides comprehensive and inclusive safety training for air force personnel, other security services and organisations.

The Air Force boss believes that the service could now conduct safety courses locally in line with its vision of building capacity of officers and men, adding that with proper training of pilots, aircraft engineers and other officers,  the Service will prevent air disasters involving its aircraft.

He also reminded air service personnel not to relent in confronting the heightened insecurity in the country, stressing that it is imperative to protect the citizenry and critical national assets.

The Special Guest of honour, Retired Air Vice Marshal Mohammed Audu-Bida  told members of the armed forces that the fight against insurgency in the North East and militancy in the Niger Delta are not yet completely over, hence they must re-double their effort to win the war

The institute has conducted series of training courses from on safety management and occupational health for personnel of the Nigerian Airforce.

Russian President Putin signs law allowing him in power until 2036