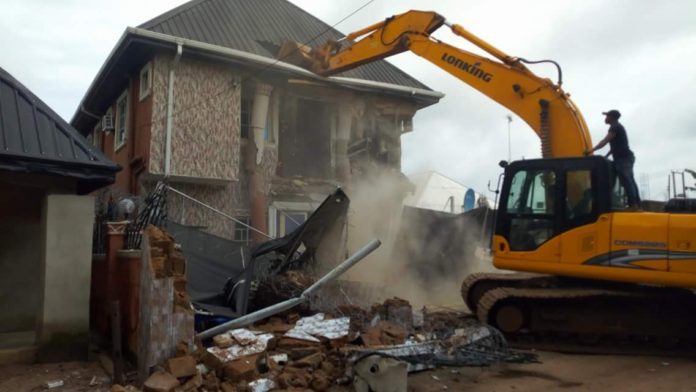 The Imo State Government in collaboration with the state Police Command have jointly demolished one hotel and five buildings belonging to three suspected kidnappers and armed robbers who kidnapped and murdered a chieftain of the All Progressives Congress, Amos Akano .

The suspects , who have reportedly confessed to the murder and other criminal activities , are Ikenna Nwosu , also known as Ezego , and two others , Eze Chukuwu (Sepia) and Chidi Anyiam ( Senator) .

The demolition of the hotel and five buildings took place on Saturday in Mgbidi, Oru East Local Government Area .

According to the Police Public Relations Officer , Mr Andrew Enwerem , the destruction was in accordance with the state law .

A state security formation , Imo Security Watch and the operatives of the state Police Command carried out the demolition of the hotel and the buildings , which was witnessed by villagers .

He said the buildings and hotel were proceeds of the ill-gotten wealth from the suspected kidnappers , who he said made confessional statements informing the police where the hotel and buildings were located and how they made money to build them.

Enwerem said that apart from the kidnap and murder of Akano , the gang was also responsible for the abduction of Daniel Akukanwa, Anayo Ihegbe, Patricia Okoronkwo, Obijuru Kechinyere and Ndebelie Edwin.

He said the arrest of the three notorious kidnappers by the operatives of the Federal Special Anti Robbery Squad of the command led by its command , Godfrey Victor, was a major breakthrough in the command’ s effort to eradicate crime in the state.

“ The demolition was carried out by the state government. We were only there to provide security and make sure that there was no breakdown of law and order .

“ The suspects whose hotel and five buildings were demolished were responsible for the kidnap and murder of a chieftain of the All Progressives Congress in the state , Amos Akano . They have committed other atrocities .

“ The demolished buildings and hotel are proceeds from their heinous crimes. It is a law in the state that buildings that were acquired through abductions would be demolished in order to dissuade others from taking to the business of abducting people for ransoms ,” he said.