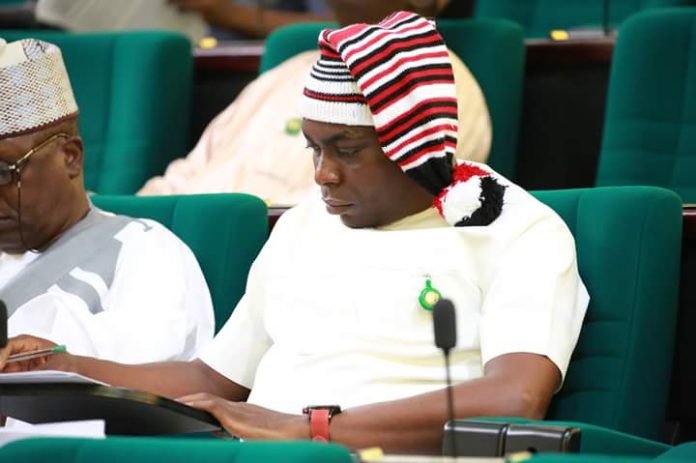 Member representing Ohafia-Arochukwu federal constituency Honorable Uko Nkole says members of the National Assembly that defected to other political parties do so in fulfillment of their constitutional rights.

In an exclusive interview with Abia Breaking News, Honorable Uko Ndukwe Nkole said it is not something that is new or strange but a fulfillment of their constitutional right, adding that Section 68 of the constitution of Nigeria, precisely section G gives a legal backing to their movement.

Asked whether he is confident that the Peoples Democratic Party, PDP, will win the presidency come 2019, the legislator maintained that the power to choose the next president lies on the electorate, explaining that “I will always wish my party, the PDP success, but the decision is with the electorate, they have the final say.

“When PDP was in power, at least the staple food we have here is rice and a bag right now is about 21 to 22 thousand naira, whereas, then you could get three bags with that price, so that is what you can use to check. How much is a dollar, how much was it then? So all those things are impacting on the citizens.

“Imagine just yesterday (Thursday), a sitting senator of the Federal Republic of Nigeria was kidnapped by unknown gunmen, if a senator is not protected, how are we sure of an ordinary citizens? What happens to them? On daily basis, the economy is stifled. Today, we are talking about a minister of Finance has acknowledged that her NYSC certificate was forged, and you are still retaining that position, what kind of corruption are we fighting?” he queried.

He advised that the electorate should exercise their rights come 2019 so that Nigeria can get better. He explained the rationale behind the “e go go again” branded vehicles.”It is a political slogan, an innovation in the federal constituency arising from the unprecedented performance of this man and the governor and the entire PDP family in Abia state. So, it is way of appreciating hard work and saying that the result for hard work is more work. Also, it’s a shuttle that will carry people at reduced rate, especially considering the price of petrol, which is sold for 145 naira, as against 85 naira that was sold by PDP.

“This is one thing that has an effect on the rural populace. So i have to take Nigerians back to those good days by cushioning the effects of the hardship experienced by our people. These are modest, but lofty efforts to improve the lives of my constituents.

“Another idea of the ‘e go go again’ branded vehicles is that money realized from the shuttle will take care of the vehicles, the party, some incidentals, so that the party on their own can stand, as well as sort out some financial issues that will be raised by my structure.

“It is a scheme intended to be sustained. It’s an idea that if well managed will grow into a big organization. Its part of the innovations I’m bringing to my federal constituency to help and benefit my people and I hope that in three to five years time, these vehicles can go beyond our federal constituency, go to Umuahia, go to Aba and even Lagos in order to generate funds that will keep the constituency going from the private sector angle as we cannot always be dependent on the government, he explained.

On aspirants jostling to contest against the lawmaker in 2019, Uko Nkole reiterated that the power is in the hands of the electorate, noting that he is confident that he is doing the right thing and is representing his people well.

He expressed optimism that by the end of the voters registration exercise in August, Abia state should be looking at over 2 million voters, following the report that already, 1.85 million Abians have been registered by INEC, commending the governor for declaring the 2 days public holiday for Abians to get registered and obtain their PVCs and INEC for putting in their best.