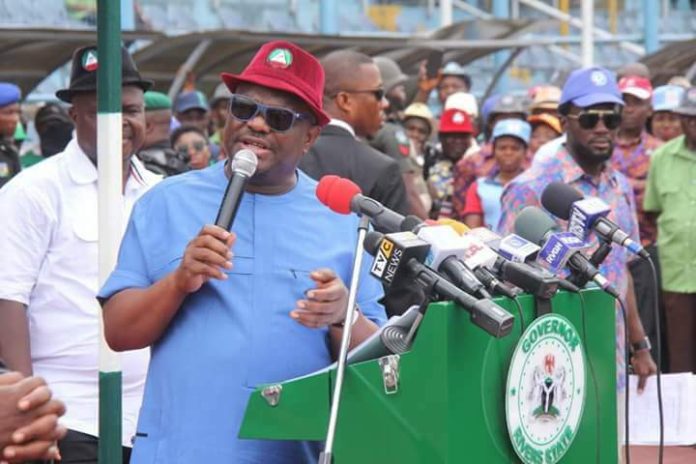 RIVERS  State Governor, Chief Nyesom Wike, has accused the All Progressives Congress of playing politics of vindictiveness, intimidation and illegality while Nigerians are being denied the dividends of democracy.

Wike was making reference to the position of the National Chairman of the APC, Adams Oshiomhole, on the defection of Governor Samuel Ortom of Benue State from the APC to the Peoples Democratic Party.

The governor, who spoke with newsmen in Port Harcourt on Saturday shortly after inspecting some projects, decried the allegations by the ruling party against Ortom on the killings by herdsmen in the state, describing such claims as unfounded.

“The APC National Chairman, Adams Oshiomhole, said in one breadth that Ortom is the best that they have. The following day, because he had defected, Oshiomhole said fielding Ortom would have been a calamity. This double-speak is laughable.

“I think it is unfair for the APC National Chairman to begin to do the work of the security and the judiciary.  For him to indict the aides of Ortom for Benue killings when the APC never took that position when he was in their party is most unfortunate.

“Now that the Benue State governor has defected, they are throwing up these allegations. These are the people who claim they want to fight corruption, but they are always acting illegally,” he said.

Wike described the gale of defection that hit the APC as an indication that the Federal Government, which is a product of the ruling party, had failed Nigerians.

The governor stated that more high profile defections were in the offing across the country.

“Politics is all about alignments and re-alignments. We expected these defections, knowing that the ruling party at the national level has completely failed the people.”

The Significance of the Endorsment of Chima Anyaso by Umunna and...