Home PUO POLITICS History will be kind to you, Secondus assures Saraki, others. 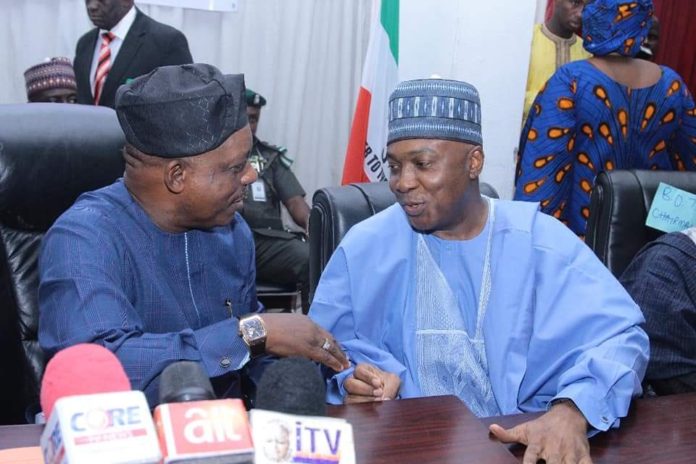 …… Charges CUPP to brace up for the challenges ahead.

The National Chairman of the Peoples Democratic Party, PDP, Prince Uche Secondus has assured the Senate President Dr Bukola Saraki and others who defected to the party recently that history will be kind to them for identifying with the people.

Prince Secondus who spoke at the 81st National Executive Committee NEC meeting of the party, told thevteam of defectors to the party led by the Senate President and three state Governors of Benue. Sokoto and Kwara that the bold steps they took would not be in vain.

“The bold steps you took to return to the party where you truly belong, is a sacrifice not for yourself but for Nigeria and history will be fair to you”

According to a statement from the National Chairman’s office signed by media adviser Ike Abonyi, Prince Secondus described Senator Saraki as the key to the renewed struggle to free Nigeria.

Prince Secondus expressed regret that agencies of government established to protect the people have been deployed to assault institutions of democracy by the federal government mentioning incidences involving security agencies in Ekiti, Benue states and the homes of the Senate President and his deputy.

He said that the country is sliding dangerously under the watch of APC federal government and rather than confront the challenges they continue to feign ignorance of the situation as he predicted that they will remain in aloof until PDP takes over Aso Villa.

Prince Secondus who led the members of the NEC to observe a minute silence for souls of innocent Nigerians killed across the country said that rather than defend the country security agents have been deployed to harass and intimidate opponents and those with dissenting voices..

In his own remark, the Senate President said he and his defecting colleagues are happy to be back home where they truly belong.

Speaker after speaker in the well attended NEC expressed happiness at the turn of events but warned that the battle is not over until victory is achieved come February 2019.

The high point of the NEC meeting was the return of the defectors, that included Dr Saraki, Governors Samuel Ortom of Benue, Aminu Tambuwal of Sokoto, and Rabiu Kwakwaso and other members of the National Assembly who defected.

Earlier in the day at the commissioning of the National office and the inauguration of the steering committee of the Coalition of United political parties CUPP, Secondus charged members of the coalition to be ready for the challenges ahead and rescue Nigeria from the APC damages.