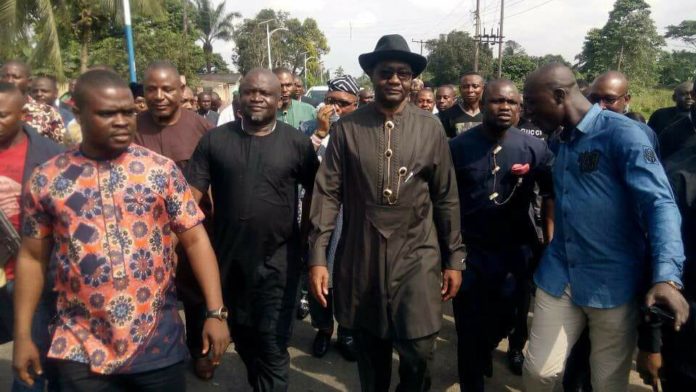 A Mid-Drama played out at the Rivers State High Court today Thursday 2nd August 2018 over who is the rightly Counsel to the All Progressive Congress(APC) on the suit filed by 23 aggrieved Members of the Party .

The 23 aggrieved members of the APC had gone to court to seek redress, claiming that some of them were not allowed to participate in the exercise, among other claims.

However, the State High Court issued an interlocutory injunction stopping the party from using the result of the congress on May 5, 2018, to hold the LG congress of the party on May 12.

Justice Chinwendu Nwogu of the State High Court, after listening to the arguments of the counsel for the aggrieved APC members, Henry Bello, and the then defence counsel, Tuduru Edeh, observed that there was no evidence to indicate that an appeal had been entered on the matter, especially as it concerned the order that the congresses should not be conducted in the meantime.

Nwogu described as academic the cancellation of the state APC congress results held on May 5 and 12 and postponement of the same congresses to May 19, 20 and 21, 2018.

He said it was wrong for the APC to disobey the court order, even as he recalled that the party attempted to no avail to lock the gate of the court.

Nwogu also described the holding of similar congresses that had been stopped by the court on later dates as contempt, saying that the act was aimed at arm-twisting the judiciary.

At the resumed hearing of the case Today, the Court held that it was only APC that  can determine their  Lawyer Is

PUO REPORTS gathered that the The National Legal adviser of All Progressives Congress had written the court to halt Lateef Fagbemi SAN from representing the party in Rivers State which is in consonance with the ruling of the Court Of Appeal wherein the justices held inter alia that a letter from the National Legal Adviser supersedes that of the State Legal Adviser.

The court graciously granted the application as ”it is within the scope of a client to change legal representative at any point in time”.

The Court Adjourned the Case On 24th September,2018. for Ruling.

APC leaders must work towards genuine reconciliation of all aggrieved members...

2023: Obaseki, Okowa Back Consensus As Saraki Says Nigeria Inches Towards...