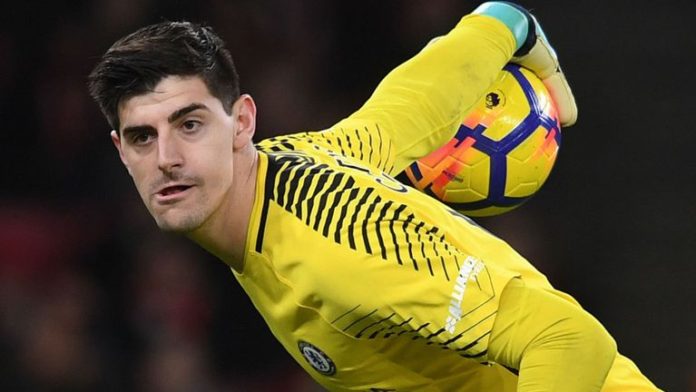 Belgium coach Graeme Jones believes the highly-rated goalkeeper will be on the move this summer, with a switch for Eden Hazard also a possibility

The 26-year-old goalkeeper has been linked with a move to Santiago Bernabeu for some time after making no secret of his desire to be reunited with his young family in Spain.

It is expected that the Blancos will step up that chase over the coming weeks, with Goal having revealed that the La Liga giants are merely waiting on Chelsea to find a suitable replacement

Once that search is finalised, Jones – who left his job with the Red Devils to join Darren Moore’s coaching staff at West Brom on Thursday – believes that Courtois will be making his way through the Stamford Bridge exits.

A man who worked with the highly-rated keeper as part of Roberto Martinez’s backroom team at World Cup 2018 told talkSPORT when asked if he expects a move to be made: “I think definitely in Thibaut’s case.

“He’s got under a year left [on his contract] now, and I can only see him moving if I’m being honest.

“He’s obviously won the Golden Glove at the World Cup, and he had a fantastic tournament.

Courtois is not the only Belgian star to have seen his future called into question over recent weeks, with several countrymen also being linked with moves before the next deadline.

Club colleague Eden Hazard is another to have sparked talk of interest from Madrid, while Tottenham defender Toby Alderweireld is said to figure on Manchester United’s radar.

Jones added on the potential of either of those star turns taking in a change of scenery: “With Eden I don’t know.

“Contractually he’s a Chelsea player, but he’s another who had a fantastic World Cup and could play for any team in the world.

“Again, Alderweireld’s contract is running down. Toby is a great boy and an excellent footballer, and I think he’s one of those boys that whoever he plays for, he will be focused and will give everything he’s got.

La Liga is a disgrace and the slowest in Europe –...