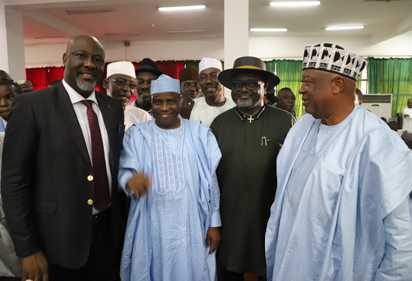 Sokoto State governor, Aminu Tambuwal has warned against any illegal attempt to effect a change in the leadership of the National Assembly, warning those bent on impeaching Senate President, Bukola Saraki to perish the thought.

Tambuwal who stated on Thursday at the 81st National Executive Committee (NEC) of the Peoples Democratic Party (PDP) noted that any recourse to illegal impeachment would be matched by an equal force of resistance.

Berating the state of affairs of the nation under the All Progressives Congress, APC-led administration, Tambuwal said when Nigerians trooped out enmasse to elect the current government more than three years ago; they expected a robust democracy where they would be free to hold contrary political opinions without fear of harassment.

“Only about three days ago, I did say that Nigerians will not accept prison-yard democracy; a situation whereby people would be simply framed up on account of disagreement in terms of political leanings, is unacceptable. And we cannot afford to allow our country to drift further. It is not about any interest, it is about this country. This country is on a cliff. We must retrieve it, we must position this country and restructure it for the benefit of Nigerians.

“When they talk about cross carpeting, I began to wonder. When I cross carpeted the other time, did they complain? When I hear that some people are trying to break into the chambers of the Senate to steal the mace and install a pseudo President of the Senate, I wonder whether they actually know the rules of our democratic engagement. It’s not a Gestapo. We are in democracy.

“It is a question of confidence of members of the chambers. So if the senators have confidence in Bukola Saraki, they should continue to sustain him as President of the Senate. And so be it with Mr Speaker, Dogara (Yakubu).

“Let them hear it very clear. If you try it (illegal impeachment), we will match out our forces in this country and jam you. Because we are talking about democracy. We cannot afford to allow anybody – no matter how highly placed – to toy with the future of about 200 million people in this country.

“Democracy is a process. It is not an end to itself. So, if the Senate President has decided as a matter of choice to shift base because of what is happening in the country, what is new about it? After all they have benefitted from it.

“The task is very great. We have no more time to waste. We must go round to convince Nigerians that this is not the government that we deserve. We must change the change and usher in a better democratic culture and good governance for this country,” Tambuwal stated

On his part, Saraki described his first day at the party’s national headquarters since his defection as “A great day for our country.” While stressing that a day for long speeches would come, the Senate President expressed gladness to be back to the party where his journey to political limelight began in 1999.

“I am happy to be back to the political party where I started my political career,” he added even as he called on party leaders to go the extra mile of returning the PDP back to power.

“Everybody is important and no sacrifice will be too much to make in our journey to the Promised Land.

“When we get back to our constituencies, let us open our arms and receive the numbers that will give us victory come February 2019 because it is for a better tomorrow for the Nigerian people,” Saraki said, saying he offers himself in the task of retrieving Nigeria back from the grip of the ruling party.

An elated national chairman of the PDP while welcoming the returnees which also included the lawmakers representing Kano Central Senatorial District, Musa Kwankwaso and Benue North-East, Barnabas Gemade, charged party faithful to remain resolute, adding that the ruling party will continue to assault democratic institutions in the country.

And with barely seven months to the elections, Secondus tasked security agents and the electoral umpire on the need for impartiality in the discharge of their constitutional duties.

“If the security agents and the Independent National Electoral Commission (INEC) think they are now a parastatal or arm of government; we challenge them to wait and see,” he warned.

At the end of the meeting, NEC approved a review of party’s rules to look into the Not-Too-Young-To- Run Act. It also discussed a timetable for the primary elections, with the National Publicity Secretary, Kola Ologbondiyan saying the party would make its position clear on the timetable “in the days ahead.”

Ikpeazu Sworn In for Second Term,Promises Better Days For Abia