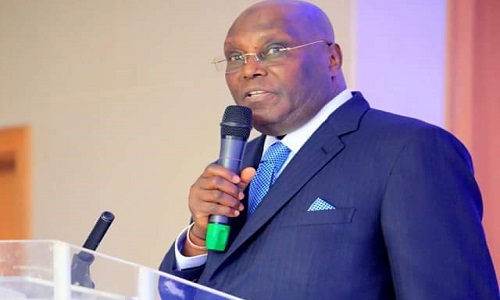 The Nigerian political space was shaken to its very foundation last week when 15 Senators and 34 House of Reps members left the ruling APC to the PDP. This came when the newest big man at the helms of affairs Mr Oshimole has come out to tell everyone that, “it is only dishonourable men that will attempt to leave the APC for the PDP”.
The mass defection from the APC has continued unbated as more bigwigs joined the opposition party. The intensity at which this drama is unfolding is shocking and quite revealing. The governor of Benue State Mr Ortom was the first to fire the shot on the list of governors who intended to leave the APC. He left the APC with 22 members of the state assembly. HE. Sen. Bukola Saraki and Gov Abudullfatah Ahmed of Kwara State have just joined the moving train which is the PDP, While the Sokoto State governor, HE. Alhaji Aminu Tambuwal also joined the PDP.

The APC is in tattered and completely shattered. The tsunami has in no small measure reduced the APC to mere rubble. While the PDP is busy gathering the remnants – which is the survivors. The APC can never be the same again. The propaganda team of the APC went into action to put a counter narrative as it’s in their usual characters. Alas, there is no amount of damage control mechanism that can change the status quo.
The deepness of the wound could not be filled with mere rhetorics and merchantist writings. Therefore, the APC will have to live with this startling and mindboggling reality.

In the light of the above, concerted effort should be made to accommodate all the defectors. And give every member enabling environment within the party. This is where the Atiku option comes to mind.

The Atiku option seems to be the only lifeline left for the opposition party to wrestle power from the ruling APC. The concept of the first eleven must be brought to bear. It is a tradition that no nation or team will be going into a contest with their second best which is their second eleven. The Atiku option is the first eleven of the PDP as well as their best choice. Anything contrary will amount to suicidal as it may not gather the needed momentum to come out victorious.

The Atiku option is the only option left for the opposition party. It has to be carefully utilized. Because it is only Atiku that has the clout to gather the momentum needed to dislodge the ruling APC from power. The opposition party need to consider some certain factors which are the basic tenets that determine electioneering victory. They include the following:
(1) Experience.
(2) Qualification.
(3)Leadership Prowess.
(4) Selfless Character.
(5) People Oriented.
The Atiku option has the above listed factors in quantum.

Men and brethren, let us rise in unison to support the Atiku option.

This is the time to speak up.

Share the article untill the leadership of the PDP read it.

Anambra election: A test of Buhari’s policies By Levi Obijiofor