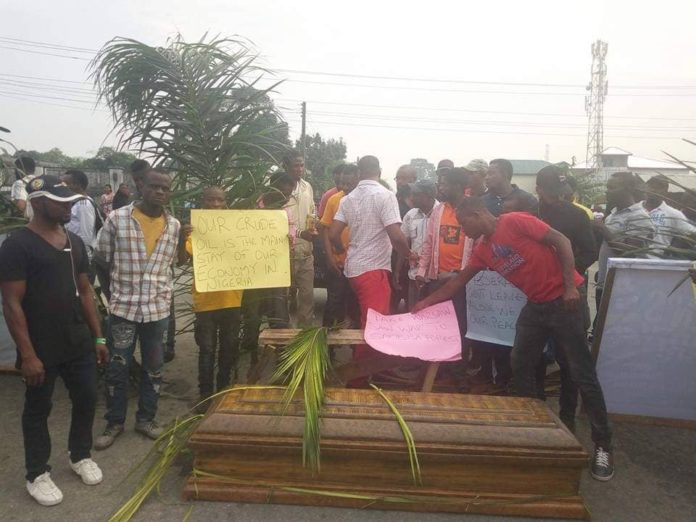 Youths of Eket, Ibeno, ONNA and Esit-Eket local governments, who form the core oil producing communities have barricaded ExxonMobil facilities with coffins, protesting against the moves by the All Progressive (APC) to plunge the state into chaos using the Nigerian Police Force as the instrument.

The peaceful protest which commenced during the early hours of Wednesday, marred the activities of ExxonMobil across the entire Eket Federal Constituency of Akwa Ibom state.

The youths who thronged out in thousands in solidarity with the Governor. Mr. Udom Emmanuel and the Speaker, Onofiok Luke, carried placards with inscription like Sen. Akpabio leave Gov. Emmanuel alone, Eket Youths are comfortable with Gov. Emmanuel.

Some other inscriptions include The peoples might is mighthier than so called Federal might. :Our crude oil is the mainstay of Nigerian economy, :Akwa Ibom is peaceful under Gov. Emmanuel.

The Commissioner of police must go, We wont succumb to Akpabios Warsaw threat. You cant government by force, wait for elections”, among others.

Speaking with iReporters , Mr Tommy Enodien, the youths Caucus Chairman in Eket disclosed that the peaceful protest was as a result of what is playing out in the state.

He explained that ExxonMobil was the contact point to pass the message to the Federal Government of Nigeria.

“We are protesting at ExxonMobil facility because it sustained the economy of Nigeria, so any disruption of their facility will attract the attention of the federal government.

“We have seen some people boosting that they have federal might but we are here to tell them that the people’s might is mightier than federal might.

“We are also here to send warning signal to Federal Government by drawing the attention to the fact that the crude oil that comes from the mainstay.

“Akwa Ibom produces the highest quantity of that sustained the economy of the nation,” Enodien said.

The youth Caucus Chairman said that the state would resist the Warsaw threat and ensure that Akwa Ibom remain peaceful.

He noted that for the past three and the half years, there has been relatively peace in the state and they want the peace to be sustained.

Enodien explained that the state government would complete its eight years in office and nobody would disrupt it.

Also speaking, Comr. Daniel Essien, President of Village youth Presidents in Eket, frowned at the unfolding scenario in the state, saying it is only selfish interest and desperation by the All Progressive party, to muscle power by force that can bring about this catastrophic situation the state is snowballing into.

“It has also come to our notice that our resources instead of being used for development are channeled into procuring arms and mobilizing security to destabilize peace in the state, this is unacceptable and shall be resisted even to the last drop of our blood” he said.

They youths however called on the Federal government and the Inspector General of Police, to immediately redeploy CP Miko from the state for discharging his duties partially, while declaring their unflinching support to Gov. Emmanuel and the Speaker, Onofiok Luke, warning that nobody can intimidate or lure them to perdition and servitude.