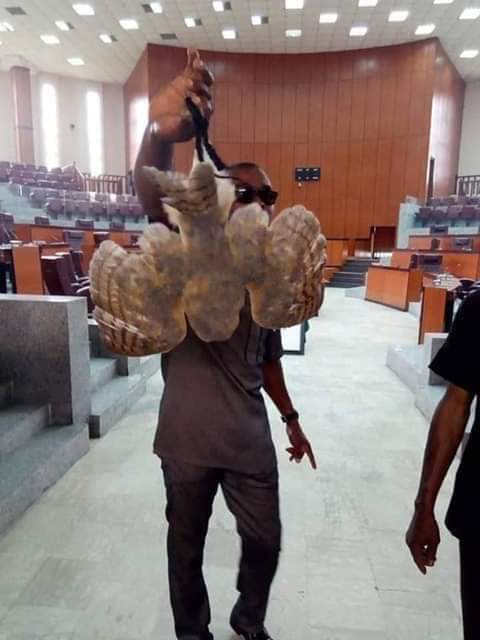 The Akwa Ibom State House of Assembly today got a scare, as workers were shocked to discover a strange evil bird on seat of the speaker of the Assembly, Rt. Hon. Barr Onofiok Luke.

The Strange Owl was found ahead of the sitting of the house which was billed to commence from 10am.

According to investigations, it was part of a charm done at Ikrok’s shrine at Urua Akpan in Essien Udim allegedly as part of a plot to either eliminate or scare away the speaker from returning to the assembly.

The source maintained that the APC chieftains are afraid of Barr Luke as being the one who is giving more confidence to Governor Udom Emmanuel, hence their plot to get him out of the way.

A source told our reporter that there is a grand design to either diabolically or brutally eliminate influential key personalities in the PDP who are the strong back bones of Governor Emmanuel before the end of December.

This charms according to the source was done in an anticipation of the house sitting today for the commendation session in honour of the late formervmember who represented Ikono State Constituency in the 3rd and 4th Assembly, Dr Clement Bassey.

However the evil bird was caught and taken out of the complex while a prayer was conducted before the sitting which was attended by serving members and former members who served during the tenure of the deceased former lawmaker.