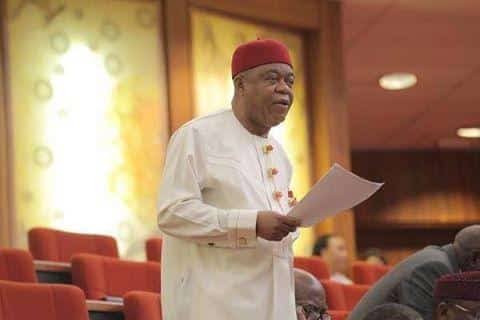 Senator T. A. Orji, CON, Representing Abia Central Senatorial District at the National Assembly, Abuja has been rated the Highest in Legislative Productivity in a Report Card of the 9th Senate Volume one, Number one ( June 2019 – May 2020) Captioned How Former Governors Stand in Bills Chart of the 9th Senate.

Senator Theodore Orji, Abia Central, Abia State, has Seven (7) Bills to his Standing in the Bills Chart of the 9th Senate according to the release. He is in that bracket with Senator Abdullahi Adamu, Nasarawa West, Nasarawa State with seven bills on the Bills Chart.

In the Federal House of Representatives, Hon. Benjamin Kalu, Representing Bende Federal Constituency, and Hon. Oluga Taiwo Olubunmi are among the first ten (10) New Members of the Three Hundred and sixty Legislature that have the Highest Number of Bills in their names.

Senator T. A. Orji, also has several completed and ongoing projects dotted across his constituency, Abia Central Senatorial District, Abia State.
These include:

Annual Scholarship Programme for over One Hundred Students drawn from the six local government Areas of Abia Central Senatorial District.
In all facets of Legislative Duties, Senator Theodore Orji stands out distinct.